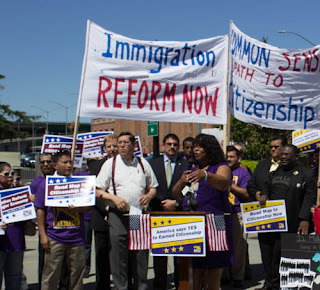 In San Diego, California, nine activists completed six days of a hunger strike outside the Mission Valley Hilton Hotel on April 10 -- the day demonstrations took place across the U.S. demanding immigration reform.  Hunger strikers were protesting the firing of 14 of the hotel's workers, after Evolution Hospitality, the company operating the Hilton franchise, told them that it had used the government's E-Verify database to determine that they didn't have legal immigration status.
"The company says that E-Verify is making them do this, even though many of the workers have been working here for years," said Sara Garcia, a supporter and hunger striker from House of Organized Neighbors, a local community organization.  "But they started firing them when the workers were organizing a union."
"I clean 16 to 18 rooms a day, and they pay me $8.65 an hour.  No one can live on that," explained Leticia Nava, a fired worker.  " I'm a widow with three children who depend on me.  What is happening is not just.  We are immigrant workers, and the only thing we're asking is to work.  That's not hurting anyone."
Garcia and Nava accuse the company of using the government system for immigration enforcement in the workplace, a database called E-Verify, in order to retaliate against 14 women for their union support.  But they also say that the E-Verify system is used much more extensively, to fire workers even where no union organizing is taking place.

San Francisco demonstrators call for an end to immigration-based firings.

"Many companies are doing the same thing.  They're manipulating the system because what they're really interested in is low wages," Nava charged.  "This isn't the first time this happened to me.  I was fired the same way two years ago.  Now my children are all scared because they see it's harder for me every day. Tomorrow I'll have to go out and find another job, and E-Verify makes that more and more difficult.  The impact on us is not just money - it affects all aspects of my life."
Nava and Garcia joined the tens of thousands of immigrants and immigrant rights activists who demonstrated on April 10, calling for the reform of U.S. immigration laws.  Yet on the same day, legislators drafting reform proposals in the U.S. Senate proposed changes that would make Nava's experience more widespread than ever, which were then contained in a bill they introduced a week later.
Both Garcia and Nava agreed that getting rid of E-Verify should be part of immigration reform.  "This part of the law is inhumane and unjust," Garcia says.  "It has economic, psychological and even moral effects.  Instead of children worrying about schoolwork they're worried about how they'll survive or even just eat."  Nava declared simply, "This part of the law should be eliminated."
Congress, however, proposes to exact a price for the legalization of undocumented immigrants.   The "Gang of Eight" Senators drafting the reform bill announced they intend to expand the E-Verify system to cover all employers, and make its use mandatory.  This was only one of a number of measures that would increase the severity of many of the anti-immigrant measures already part of U.S. law.

Lorena Reyes, who was fired from her job as a housekeeper at the San Jose Hyatt Hotel because she supports the union and protested sexual harassment, marched for immigrant rights.

The Hilton workers and their supporters, as well as the union helping them, UniteHere, all believe that immigration reform should include a legalization process.  They want one that would give the 11-12 million undocumented people living in the United States a quick and accessible way to gain legal status.  That demand ran through all of the hundreds of demonstrations around the country, from the 30,000 people on the mall in front of the Capitol Building in Washington DC to the thousand marchers in downtown San Francisco.  It was a demand voiced by hundreds of janitors and security guards in Silicon Valley, and by teachers and elementary school students in Berkeley, California.
The Senators, however, are proposing a plan that would require undocumented people to spend a decade in a provisional status before even being able to apply for permanent legal residence.  Then they would have to maintain that status for another three years before they could apply to become citizens, and gain basic political rights.  The citizenship process is so overloaded that processing applications now takes months, even years. And instead of anticipating the logistical bottleneck of millions of people applying for citizenship at the same time, the Senators declared that legalization applicants would get no dedicated process.
People seeking legal status would have to "get in the back of the line" - their visa applications would be processed only after all other pending applications. That could have people waiting even more years.  Today the government is still processing visa applications for some relatives of U.S. citizens and residents that were filed over two decades ago.  The undocumented would only become eligible for residence if they learned English, and were continuously employed for 10 years, or were family members of someone who was.

Posted by Duane Campbell at 2:51 PM