Winnemem Wintu Tribe: Speak out against the raising of Shasta Dam 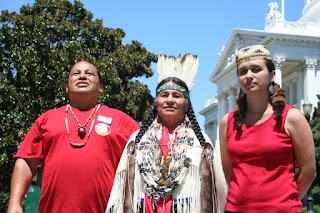 The Bureau of Reclamation announced on October 26 that "stakeholders" may submit written comments until Friday, December 28 on the Bureau's "draft feasibility" report on raising Shasta Dam and enlarging its reservoir, a plan vigorously opposed by the Winnemem Wintu Tribe and other Tribes, fishermen and environmentalists.

Caleen Sisk, Chief and Spiritual Leader of the Winnemem Wintu Tribe, urged everybody concerned about the salmon, the Delta and the rights of indigenous people to send in a comment opposing the raising of Shasta Dam before the December 28 deadline.

Corporate agribusiness interests are backing the raising of the Dam, in tandem with Governor Jerry Brown's Bay-Delta Conservation Plan to build the peripheral tunnels, in order to export more northern California water to irrigate drainage-impaired land of the west side of the San Joaquin Valley. The construction of the tunnels would hasten the extinction of Central Valley salmon, Delta smelt, longfin smelt and other fish species.

In February, Reclamation released its draft feasibility report that examined the potential costs, benefits and impacts of enlarging Shasta Dam and Reservoir. Reclamation has been studying the feasibility of alternative dam and reservoir sizes and water operations, in addition to a no action alternative. The alternative dam raises studied have ranged from 6.5 feet to 18.5 feet.

"Raising the dam to those heights would result in corresponding increases in reservoir storage from 256,000 acre-feet to 634,000 acre-feet," according to Pamela Martineau of ACWA (the Association of California Water Agencies. (http://www.acwa.com/news/infrastructure/reclamation-seeks-written-comments-draft-report-enlarging-shasta-dam-and-reservo) "The additional storage capacity would be used to improve the reservoir’s ability to provide colder water for winter-run Chinook salmon during drought years. It also would increase water supply reliability for agricultural and municipal water users in the state, the report asserts."

Reclamation has received comments since the Draft Feasibility Report was released in February and is now requesting any additional written comments from all interested individuals, agencies and organizations by Friday, Dec. 28, 2012. "All comments received will be considered as we complete the remaining engineering, environmental, economic and financial studies and related reports," according to Reclamation.

Reclamation is also preparing a formal Draft Environmental Impact Statement and will establish a separate formal public review and comment opportunity once that document is distributed to the public.

"A decision to raise the dam and enlarge the reservoir requires complex and intricate analyses," Reclamation stated. "As the decision-making process continues, Reclamation will address public and agency concerns and comply with all applicable federal, state, and local law and policy.

In February, Caleen Sisk blasted the federal plan to raise the dam. The Tribe brought the plan to the public's attention in September 2004 when they held a war dance at the base of Shasta Dam to protesting the dam expansion proposal.

"How do they justify flooding the Winnemem Wintu people out twice?" asked Sisk. "They still haven’t fulfilled the 1941 Act of Congress that said they are to provide like lands and pay for all the allotment and communal lands. They still haven’t fixed the cemetery problems as it’s still illegal for us to bury our people in the cemetery they set up, because it is held by the Bureau Land Management instead of the Bureau of Indian Affair like the Act called for. And the Shasta Dam is still not paid for by the public."

She emphasized that the EIS is a "dehumanizing document – it takes our beautiful culture and summarizes it into a couple paragraphs, and just names a couple sites." (http://www.californiaprogressreport.com/site/winnemem-wintu-tribe-slams-federal-plan-raise-shasta-dam)

On November 2, Sisk described the dam expansion plan as "another BAD idea in so many ways."

"Send in a comment to that effect," Sisk urged. "Just say 'NO' to another bad idea to store highly toxic waste in the bottom of the dam and then just build it 20 feet higher on an earthquake fault line just to fill the twin tunnels to send water to big water corporations....not water for people."

"Cleaning up the contaminated rivers, streams, and springs makes more sense for the future needs. Bring back the BEAVERS!," Sisk urged.

Sisk challenged claims by the Bureau and water contractors that the dam raise and expansion would be used to improve the reservoir’s ability to provide colder water for winter-run Chinook salmon during drought years.

She emphasized that the study didn't include any exploration of the possibility of building a water way or "fish swim" around the dam to allow winter chinook to spawn in the McCloud River above Shasta Dam, as the Tribe and its allies have proposed.

"A bigger cold water pool is not what’s best for salmon," she pointed out. "It seems as that is one of the first goals in the EIS. But, where is the study that shows how just building a water way or fish swim around the dam would benefit and increase the numbers of salmon? A fish swim would be cheaper and produce more salmon spawning grounds in already naturally cold water."

"It would save millions of dollars in the cost of the cold water pool currently. NOAA has already found that salmon need to go up above Shasta Dam to the McCloud because of climate change. The dam raise would flood more than 7 miles of cold water spawning grounds on the McCloud River, Squaw Creek, and the Sacramento River," said Sisk.

Sisk also discovered that the real Shasta Dam raise will be at 20 feet, instead of 18.5 feet, because they will have to create a buffer zone for the height that they are not talking about yet.

"It might even be more," she stated. "All trees will be cleared again, which will be harmful to our plan to bring back salmon to the McCloud River by a tributary allowing them to swim from the Sacramento River, which will mean the salmon will swim through the Shasta Lake. They will need shade and food for their swim, not a barren 'bath tub ring."

"It will be a sad day when all trees including the ones in the old village that were planted by Bill Curl, my grandfather, are cut!" said Sisk. "We will be heart broken when our sacred site are no longer accessible again. This equals "environmental INJUSTICE" when a people must pay the price a second time without any compensation from the governments 1941 Act for the first times promises!"

"In reality, the Shasta Dam Indian land acquisition resulted in the federal government 'stealing' our lands and blocking our salmon from coming up the McCloud River," Sisk concluded.

The Draft Feasibility Report is available on Reclamation’s website at http://www.usbr.gov/mp/slwri/index.html.

Written comments can be submitted via email to BOR-MPR-SLWRI [at] usbr.gov or by mail to: Katrina Chow, Project Manager Bureau of Reclamation 2800 Cottage Way, MP-720 Sacramento, CA 95825-1893

Copies of the documents may also be viewed at Reclamation’s Regional Library, 2800 Cottage Way, Sacramento, by calling 916-978-5593. For additional information about the Shasta Lake Water Resources Investigation, please visit http://www.usbr.gov/mp/slwri/index.html.

For more information on the Winnemem Wintu Tribe, go to: http://www.winnememwintu.us

Posted by Duane Campbell at 8:21 PM