Every Worker an Organizer 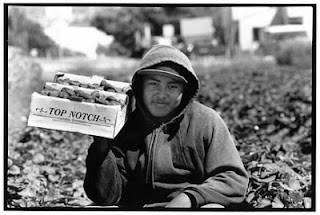 Hallway next to the Governor's Office
May 20-26, 2012
Sacramento, California
Open to the public


Farm labor is a key element historically in the photographic documentation of social reality in the US, and in particular the documentation of social protest.  Dorothea Lange, Hansel Meith, Otto Hegel, and the generation of the 1930s and 1940s left a body of work showing the extreme exploitation of farm workers, and documenting the early farm labor organizing efforts, part of the great labor upsurge of those decades.
The iconography of social documentary photography was shaped by images like Lange's mother and children in Nipomo, or those of the Pixley cotton strikers packed onto the back of a truck under their banner "Disarm the rich farmer or arm the workers for self-defense!" or the growers with their rifles waiting in ambush.
The first two decades of the growth of the United Farm Workers was undoubtedly one of the most-photographed social protests of the civil rights era.  It too had its icons -- the line of marchers on their way from Delano to Sacramento, silhoutted against the sky, or Cesar Chavez weakened by his fast, at the side of Robert Kennedy.
In 1994, a year after the death of Chavez, the union made a second march from Delano to Sacramento.  In 1996, it began an effort to organize the central California coast strawberry industry, employing 25,000 workers.  That struggle pitted workers and the union against mass firings, blacklists, company unions, and the use of the legal structure to subvert workers' efforts.  In 1998, workers at the country's then second-largest vegetable grower, D'Arrigo Brothers walked out on strike in the Salinas Valley
The photographs in this exhibit document this period in the union's history, especially the organizing drive in Watsonville and the strike at D'Arrigo.  Some also document working lives of workers themselves.  Strawberry pickers bend over double in the rows, run as they pick wine grapes or tomatoes, or balance at the top of date palms without safety lines.  They show as well the extreme youth of farm workers today, where the average age has fallen to 20.
Like all workers, farm laborers take pride in the skill it takes to do their jobs, their bravery in the face of dangerous conditions (farm labor has one of the highest occupational injury rates of all US employment), and the social contribution they make in providing food for millions of people.
These are not images of passive exploitation, designed to elicit just a sympathetic response.  They are  a documentary record of the efforts workers have made to organize a union in the face of brutal working conditions and low wages.
The images are a view from below, looking at the work process and the union from the point of view of workers.
The UFW has had an enormous impact on the US labor movement over the last 50 years.  It helped to inspire a resurgence of interest in organizing, and trained hundreds of people who went on to become organizers for unions and community organizations all across the country.
These photographs are part of a larger exhibition and documentary project about farm workers and migration tody.  This set of images was exhibited at the Oakland Museum of California, the U.S. Labor College, Bread and Roses Gallery and the American Labor Museum, thanks to support from the Northern California Coalition for Immigrant Rights and the Zellerbach Foundation.

Posted by Duane Campbell at 5:28 PM