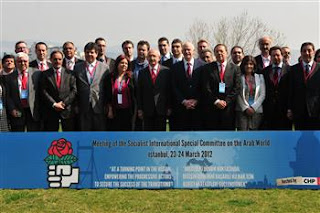 The Socialist International (SI) Special Committee on the Arab World called today on the United Nations Security Council, especiallyRussia and China, to act in line with the international community to protect the Syrian people in Istanbul.
Speaking at the two-day meeting’s final sitting, SI President and formerGreek Prime Minister George Papandreou said the organization stood firmly on the side of the Syrian people in their fight for democracy and human rights but opposed any intervention by Turkeyagainst Syria.
“The [Bashar] al-Assad regime refuses to accept that change is inevitable. Consequently, we have fully backed the efforts of the United Nations and the Arab League for an end to the killing, for the protection of the lives of Syrian citizens and a humanitarian response which we see as a fundamental imperative,” Papandreou said in the meeting’s closing statement.
Republican People’s Party (CHP) leader Kemal Kılıçdaroğlu also said that “if war is not inevitable, it is murder” in reference to saying of Mustafa Kemal Atatürk, the founder of modern Turkey. He also added that his party opposed the creation of a buffer zone between Turkey and Syria.


Papandreou said the Arab Spring should keep alive the “spirit of Tahrir Square” and the demands of the people who drove the movement for change. The committee has expressed its concern for the restrictions faced by democratic activists, bloggers and members of civil society engaged in the political process.

Papandreou also said they wished the CHP success in its efforts to ensure that Turkeyguarantees freedom of expression for all its citizens and respects the independence of the judiciary – a fundamental condition of a democratic political system. SI also said it wished the party well in its goal of advancing its social democratic vision for Turkey.
“Turkey needs to revise its penal code and anti-terror laws which are the reason for the imprisoning of journalists,” Papandreou said when asked about scribes behind bars.
The Socialist International Special Committee on the Arab World gathered in Istanbulfor its second meeting on March 23-24 to discuss ways to empower progressive actors in the region to secure successful transitions in their countries. The meeting, which was hosted by the CHP, brought together leaders and representatives of the SI’s member parties and members of democratic and progressive movements from the region.
March/24/2012
Hurriyet Daily News.  Turkey  newspaper

Posted by Duane Campbell at 8:06 PM