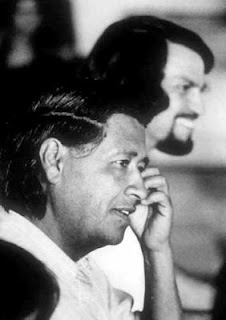 Cesar Chavez Day marks the 50th. anniversary of the founding of the United Farm Workers.
by Duane E. Campbell
Cesar Chavez Day is a state holiday in California – one of eight states to recognize the  date, and one of the few holidays  in the nation  dedicated  to a labor leader.   Sacramento and dozens of cities, counties and labor federations will celebrate the life of Cesar Chavez on March 31, 2012,
On March 26, U.S. Secretary of Labor Hilda Solis honored Cesar Chavez and the UFW founders by dedicating the auditorium at the Department of Labor in Chavez’s name.
Mexican labor leader Jose Humberto Montes de Oca of the SME, electrical workers union will lead the Sacramento  march on March 31.   Montes do Oca and the SME  in Mexico are fighting for survival against a repressive government.  In central Mexico 44,000 Electrical Power Workers (SME) were fired to  privatize the industry and destroy the union. The march begins at 10 AM. at South Side Park.
This year, 2012 is the 50th. anniversary of the founding of the U.F.W.  The Cesar Chavez celebrations focus on  the struggle for union rights and justice in the fields of California.  Along with Dolores Huerta, Philip Vera Cruz, and others, César created the United Farm Workers  (UFW) the first successful union of farm workers in  U.S. history.  There had been more than ten prior attempts to build a farm workers union.
Each of the prior attempts to organize farm worker unions were destroyed by racism and corporate power. Chávez chose to build a union that incorporated the strategies of social movements and community organizing  and allied itself  with the churches, students,  and organized labor.  The successful creation of the UFW changed the nature of labor organizing  in the Southwest  and contributed significantly to the birth of Latino politics in the U.S.


Today, under the leadership of UFW president Arturo Rodriguez, only about 8,000  farm workers enjoy benefits on the job. Wages and benefit in farm labor have again been reduced to the pre union levels.  Unionized workers   are incorporated into California's educational, health and civic communities.  The UFW has shown unions that immigrants can  and must be organized.
Chavez and the UFW are best known helping to create instrumental role in passing the  California Agricultural Labor Relations Act in 1975 under then Governor Gerry Brown  which gives workers collective bargaining rights.  The law was made necessary by the assault on the UFW of the Teamsters Union.  While workers are often able to win elections under the ALRB, they seldom can win a contract.  Growers stall and delay until the workers leave the area.
César Chavez, Dolores Huerta,  Philip Vera Cruz, and others deliberately created a multiracial organization, Mexican,  Mexican American, Filipino, African-American, Dominican, Puerto Rican and Arab workers, among others, have been part of the UFW.  This cross racial organizing  was necessary in order to combat the  prior divisions and exploitations of workers based upon race and language. Dividing the workers on racial and language lines always left the corporations the winners.
In the 60's Chávez became the pre-eminent civil rights leader for the Mexican and Chicano workers, helping with local union struggles throughout the nation.  He worked tirelessly to make people aware of the struggles of farm workers for better pay and safer working conditions. It is a testament to Cesar Chavez's skills and courage that the UFW even survived. They  were opposed by major interests in corporate agriculture including the Bruce Church and Gallo Corporations as well as the leadership of the Republican Party then led by  Ronald Reagan.   Workers were  fired, beaten, threatened and even killed in pursuit of union benefits . Non union  farm workers today  continue to live on  sub-poverty wages while producing the abundant crops in the richest valley, in the richest state in the richest nation in the world.
In response to corporate power, Cesar developed new strategies, such as the boycott, based upon  his personal   commitment to  non-violence in the tradition of Ghandi and  Martin Luther King Jr.  César  Chavez died in his sleep on April 23, 1993 near Yuma, Arizona.
Today Mexican, Mexican American and Puerto Rican union leadership is common  in our major cities and in several  industries and Latino union leaders increasingly play an important role in local, state, and national elections.  For myself  and others, the UFW was a school for organizing.  Hundreds of activists in labor and community organizations owe their skills to UFW training and experience.    Along with improved working conditions, salaries, and benefits for the unionized workers,  training this cadre of organizers remains a major legacy of the UFW.
César taught us that all organizations have problems, that all organizations are imperfect. In the last decade several books have been written criticizing the Chavez legacy.
In the midst of  several life and death struggles over power against corporate agriculture and the political power of the state, the UFW executive committee did not develop democratic union structures .  Marshall Ganz’s book, Why David Sometimes Wins: leadership, organization and strategy in the California Farmworker Movement (2009) describes these issues well.

Building popular organizations while messy  builds people's power and democracy. In creating the UFW Chavez organized thousands into a union  and inspired millions.    Today  children in schools  study his life- although such study is prohibited in Arizona and severely limited in Texas as “revolutionary”, or anti American.    Many curriculum packages for schools  stress his emphasis on service to others.  The service side of Cesar’s work was certainly inspiring.
The organizing side of the UFW legacy  changed the Southwest and  organized labor.   In a 1988 campaign and fast  Cesar focused attention on the many dangerous problems of pesticides used in the fields.  Artists have captured his image in hundreds of ways.  Schools, parks, and highways have been named for him.  Establishing Cesar Chavez holiday in California and other states has increased knowledge of his contributions.
The movement led by Cesar  created a union and reduced the oppression of farm workers.  Many people,  descendents of earlier generations of farm workers, learned to take a stand for justice.  We learned to not accept poor jobs, poor pay,  unsafe working conditions as natural or inevitable.  Rather, these are social creations which can be changed through organizing for economic and political power.  Dolores Huerta continues her important education and organizing work throughout the nation.
Now, thousands of new immigrants harvest the crops and only a small percent are in unions.  The new generations of immigrants and migrant labor hardly know Chavez’ name nor his contributions.  Yet, in other regions  immigrants are being organized into unions such as Justice for Janitors, by activists who learned their organizing skills working with the UFW. And, Latino political leaders often made their first commitments on a UFW picket line.
The generation that created the UFW is passing. A new generation of political activists, mostly within the Democratic Party, have emerged since the Chavez generations.  In the 2006 massive immigrant rights movements,  several new organizing practices emerged.   The organizing of these demonstrations was significantly assisted by persons trained within the UFW.  A new, significant Latino  union and political base has been created.
Chavez' legacy to popular struggles, to  Chicano/Mexicano self determination and to unions for the immigrant workers is significant.  The union taught us how to organize for power and for justice.  He is present in all of our work.  I plan to march on  March 31,2012    in memory of Cesar Chavez' contributions to building a more democratic society for working people. You can find our more about this remarkable leader at www.ufw.org  And, http://www.chavezfoundation.org/
And, http://www.farmworkermovement.org/

Duane Campbell is a Professor of Bilingual/Multicultural Education at Calif. State University-Sacramento and the author of Choosing Democracy; a practical guide to multicultural education.  4th. edition. (Allyn and Bacon,2010) and Chair of Sacramento DSA.

Posted by Duane Campbell at 3:00 PM