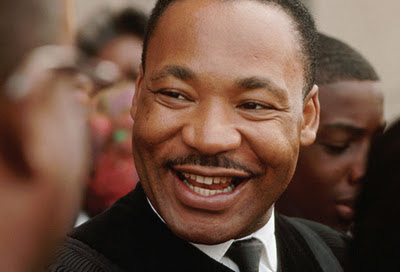 by Thomas F. Jackson
Almost 40 years ago, a united black community in Memphis stepped forward to support 1,300 municipal  sanitation workers as they demanded higher wages, union  recognition, and respect for black personhood embodied in the slogan “I Am a Man!” Memphis’s black women organized tenant and welfare unions, discovering pervasive  hunger among the city’s poor and black children. They demanded rights to food and medical care from a city and  medical establishment blind to their existence. That same  month, March 1968, 100 grassroots organizations met in  Atlanta to support Martin Luther King’s dream of a poor  people’s march on Washington. They pressed concrete  demands for economic justice under the slogan “Jobs or  Income Now!” King celebrated the “determination by poor  people of all colors” to win their human rights. “Established  powers of rich America have deliberately exploited poor  people by isolating them in ethnic, nationality, religious and  racial groups,” the delegates declared.

So when King came to Memphis to support the strike,  a local labor and community struggle became intertwined  with his dream of mobilizing a national coalition strong  enough to reorient national priorities from imperial war in  Vietnam to domestic reconstruction, especially in America’s  riot-torn cities. To non-poor Americans, King called for a  “revolution of values,” a move from self-seeking to service,  from property rights to human rights.


King’s assassination—and the urban revolts that  followed—led to a local Memphis settlement that furthered  the cause of public employee unionism. The Poor People’s  March nonviolently won small concessions in the national  food stamp program. But reporters covered the bickering and squalor in the poor people’s tent city, rather than the  movement’s detailed demands for waging a real war on poverty. Marchers wanted guaranteed public employment  when the private sector failed, a raise in the federal minimum wage, a national income floor for all families, and a national commitment to reconstruct cities blighted by corporate disinvestment and white flight. And they wanted poor people’s representation in urban renewal and social service programs that had customarily benefited only  businesses or the middle class. King’s dreams reverberated back in the movements that had risen him up.
It is widely believed that King’s deep dedication to workers’ rights and international human rights came late in life, when cities burned, Vietnamese villagers fled American napalm, and King faced stone-throwing Nazis in Chicago’s white working-class inner suburbs. But King began his public ministry in Montgomery in 1956, dreaming of “a world in which men will no longer take  necessities from the masses to give luxuries to the classes.”  He demanded that imperial nations give up their power  and privileges over oppressed and colonized peoples struggling against “segregation, political domination, and  economic exploitation”—whether they were in South Africa or South Alabama.
King’s commitments to economic justice and  workers’ rights are becoming  more widely appreciated today as we continue to confront all of the  unresolved challenges King confronted in his day.
Around 1964, King announced that the movement  had moved “beyond civil rights.” Constitutional rights to free assembly, equality in voting, and access to public accommodations had marched forward with little cost to the nation, he said. Human rights—to dignified work,  decent wages, income support, and decent housing for all Americans—would cost the nation billions of dollars.  In other speeches, however, King recognized that human  rights and civil rights were bound up with each other, part  of a “Worldwide Human Rights Revolution.” The practical experience of building a movement had already made these connections. In Montgomery’s struggle to desegregate bus  seating, for example, King heralded the American “right  to protest for right,” but discovered that it was inseparable from the human rights to work and eat. Why? Hundreds of  African Americans were fired or evicted or denied public aid for expressing themselves politically, and King was  intimately involved in campaigns for their material relief.  This pattern continued throughout the 1960s. The southern  struggle for rights became a struggle against poverty long before Lyndon Johnson’s wars in Vietnam and on poverty.
Similarly, in New York City in 1959, King joined A. Philip Randolph and Malcolm X in supporting the  white, black and Puerto Rican hospital workers of NewYork’s newly organized Local 1199. Over 3,000 hospital workers—laundry workers, cafeteria workers, janitors and  orderlies—struck seven New York private hospitals. At the bottom of the new service economy they were legally barred  from collective bargaining; excluded from minimum wage protections and unemployment compensation; and denied the medical insurance that might give them access to the hospitals where they worked. Harlem’s black community rallied to their defense. King cheered a struggle that transcended “a fight for union rights” and had become a multiracial “fight for human rights.”
King’s commitments to economic justice and workers’ rights are becoming more widely appreciated today as we  continue to confront all of the unresolved challenges King  confronted in his day. Joblessness is still pervasive under  the official unemployment statistics, and wages remain too  low to lift millions of people out of poverty. Conservative  politicians and globalizing corporations have relentlessly  chipped away at union rights and workplace safety. Tattered  safety nets have become even shoddier for poor people who  are not capable of earning. Forty-seven million Americans  are, medically, second-class citizens. Unequal landscapes of  wealth and opportunity in housing and schools still make the words “American apartheid” a dirty but accurate epithet.  And again, in a different part of the world, our military  wages a war of empire cloaked in robes of democratic idealism. On the right, complacent religious leaders  preach family morality and personal responsibility, while  neglecting our collective moral commitments to materially  supporting “the least of these.” But across the country too,  citizens are uncovering stones of hope and finding new  democratic determination. We have come a long way, but  we have a long way to go, as King would say. Lost ground  and shattered dreams are bearable, he would have preached,  as we continue the struggles for multiracial democracy,  economic justice, and human dignity that were begun long  ago, under even more challenging circumstances than we  face today.
Thomas F. Jackson is Associate Professor of History at the University of North Carolina Greensboro, and author of the prizewinning From Civil Rights to Human Rights: Martin Luther King Jr. and the Struggle for Economic Justice (University of Pennsylvania Press, 2007). For more about this important book, we recommend Maurice Isserman's review in the Summer 2007 Dissent.
This essay originally appeared on the website of Interfaith Worker Justice.
Posted from Talking Union.

In recognition of the King Holiday, Tavis Smiley moderated a conversation on solutions for restoring America's prosperity. Topics included the white paper from Indiana University's School of Public and Environmental Affairs (SPEA), released the previous day, titled At Risk: America's Poor During and After the Great Recession, which reveals the "new poor" and how the face of poverty in America has changed.

Speakers include Cornel West, Barbara Ehrenreich, Michael Moore, and more.
I tried to post this on Sat. but was unable to post.
On CSPAN.  The video stream should still be available.  Tavis Smiley said it would be played on PBS this week.
Posted by Duane Campbell at 5:17 PM