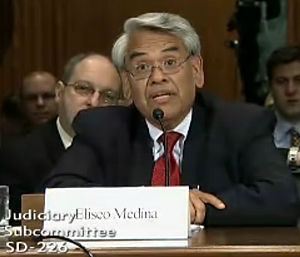 The Obama Administration acted on Friday to permit the husbands, wives, and children of U.S. citizens to adjust their status and to allow them to gain Green Cards or permission to become a resident alien.   This is a return to the policy before the 1996  Republican sponsored Immigration Act.
The primary beneficiaries of the  Obama administration's move are families in which some members are US citizens and some aren't.  At present some family members must return to their home country for up to 10 years while they apply for U.S. residency as a 1996 law – approved by a Republican-led Congress – mandates.
The proposed change will undergo a review but doesn't require congressional approval. Under the so-called "hardship waiver," illegal immigrants who are married or otherwise related to US citizens would be able to pick up the waiver before leaving the United States and then be allowed to return almost immediately after picking up visas in their home countries.  This policy used to be known as advanced parole.
According to an article in the New York Times, for Sat. Jan. 7,  by Julia Preston    the union representing ICE agents is resisting this policy change.  It has not allowed its members to participate in training to implement the new rule.   Chris Crane, the president of the American Federation of Government Employees claims that new rule amounts to violating the law.  ( This was the law prior to 1996) Crane, of AFGE, is working closely with Lamar Smith, the Texas Chairman of the House Judiciary Committee and a Republican leader on opposition to immigration reform.
In examining individual cases that may not be representative I note that   the current practice with ICE is that residents from White ( European) countries are commonly allowed to adjust their status while remaining in the U.S.  Residents from non White countries, particularly Latin American and Asian, are required to return to their home countries and apply for immigration- a process that can take up to a decade. The reason for the difference ?  Persons from mostly European countries ( and Australia), do not have a significant backlog of applications for immigration  thus, their cases can be resolved in a  matter of months- not so for Mexican, Philippinos, Chinese and similar groups.
SEIU Vice President Eliseo Medina praised the new rules on Friday.  Here is the SEIU statement on the issue.
SEIU applauds today's announcement by the Obama Administration to knock down bureaucratic obstacles for U.S. citizens who currently face hardship because their spouses cannot remain in the country legally.


The decision makes a small but significant change. It will allow spouses and a small number of adult children to apply for a hardship waiver from inside the U.S. instead of facing the risk of returning to their home countries to apply and being denied reentry into the U.S. for as long as 10 years. The risks, uncertainties and delays that come with applying for the visa from abroad create unnecessary burdens on families in hardship cases.
To qualify for the waiver, the U.S. citizen must show that she would suffer "extreme hardship" if forced to remain separated from a spouse or parent. Typical examples include U.S. citizens who are sick or disabled and are being cared for or supported by their immigrant spouse or parent.
The policy change to let immigrants in hardship cases remain in the U.S. while their applications for hardship wavers are reviewed was welcomed by SEIU's International Secretary-Treasurer Eliseo Medina in the following statement:
"Outdated laws and procedures should not keep families apart. The new process will lessen the burden on U.S. citizens, whose family members are afraid or unable to leave the country specifically because of the hardships they face. For example, a wife who is taking care of her citizen husband, a permanently disabled war veteran, will not have to choose between providing for her husband or leaving the country to apply for a green card, which carries the risk of being denied reentry for up to 10 years.
"This streamlined procedure also makes budgeting sense. Instead of having U.S. State Department officers posted overseas to shuttle applications back to the U.S. Department of Homeland Security here in Washington, the process and the costs will be cut.
"The Obama Administration is applying smart governing principles to a very simple problem and deserves credit for moving ahead in the absence of comprehensive immigration legislation from Congress. While just one small bureaucratic change will make a difference in the lives of families facing hardships, comprehensive reforms could vastly improve our economic, national and family security.
Posted by Duane Campbell at 3:13 PM

Get your Adjustment Of Status. Automated Visa Preparation System without the high legal fees. Approved by Immigration Lawyers.This will allow you to start the process of obtaining their Green Card.

Get your adjustment of status. Automated Visa Preparation System without the high legal fees. Approved by Immigration Lawyers.You can apply for the adjustment of status (Form I-485) if you had your marriage in the USA. You want to start this process immediately!