Thousands of Farmworkers march on Sacramento 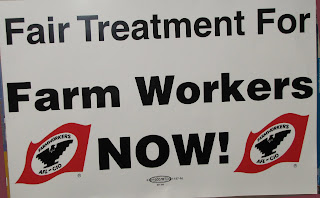 By Duane Campbell,                                     Over 3000  UFW farm workers and their supporters marched on the California Capitol in Sacramento on Sept. 4 insisting on Fair Treatment for Farm workers Now.   The march began August 23 in Madera. The march was organized by the United Farm Workers to reach Sacramento on Labor Day weekend.  Marchers  are pushing for the enactment of the Fair Treatment for Farm Workers Act and the right to be paid overtime after eight hours.
As the farm workers reached the capitol an apparent agreement was reached among legislators  to pass improvements of the existing Agricultural Labor Relations Act.  Gov. Jerry Brown and pro farm worker legislators  have struck a deal to give state regulators new powers that could help agriculture workers unionize.
The new  measures, introduced in the Legislature on Friday, would allow the state's Agriculture Labor Relations Board to certify a union if it finds that a grower has acted illegally to affect the outcome of a labor election. Currently the ALRB makes 5-10 decisions per year and few of the decisions  result in elections. The legislation would also accelerate the mediation process for workers in disputes with their employers.
The Governor would not agree to the Fair Treatment for Farm Workers legislation already passed by the legislature  which would have permitted card check verification to hold a union election.  Governor Brown  and Republicans argue that the ALRB, passed in 1976, needs more time to be developed before changing a fundamental issue such as elections.
Clearly the current  law is not working as it was intended.  Few organizing attempts can get to an election due in significant part to the  aggressive  campaigns and hostile election climate created by corporate growers.  And, for the few that have elections, election victories seldom  lead to union contracts. 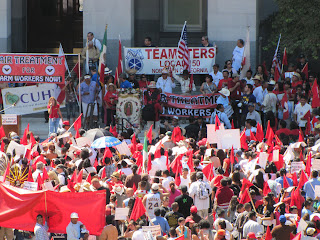 The compromise position of “improvements in the law” are as much as the UFW could win at this time.
Farm worker wages and working conditions today are worse than in  1960’ s and 1970’s  at the time of the birth of the U.F.W. Even though the ALRB law providing for an election process,   fewer than 5% of the farm workers have the protection of union contracts.  Governor Brown continues to support the  current law as it is while the UFW insists on improving the law to make union organizing possible.
Since NAFTA the exploitation of farm labor has increased on both sides of the border. Thousands of new immigrants , many indigenous people from Mexico- Zapotec, Mixtec, Triqui among others-  harvest the crops in California.   This  new generations of immigrants and migrant labor hardly know Chavez’ name nor the history of the UFW and its struggle for elections in the fields.
Farm workers came from all over California for the rally at the capitol on Sept.4 – including  significantly- delegations Triqui and other indigenous communities.
Posted by Duane Campbell at 5:06 PM