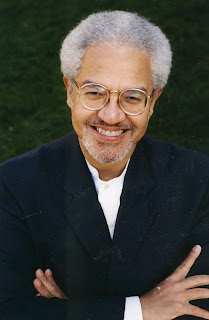 Manning Marable, a founding Vice-Chair of DSA, passed away Friday, April 1, 2011, from complications of pneumonia. He had suffered from the degenerative disease sarcoidosis for 25 years, and last year had undergone a double lung transplant.   The death of our comrade Manning is a great loss for the broad left in our country.
Manning played a major role in the  merger of our predecessor organizations, NAM and DSOC, into DSA. He was both a Vice Chair and a member of the National Executive Committee (later the NPC). For the first years of DSA he brought together a significant group of activists of color around his publication "Third World Socialist", the publication of the DSA Anti-Racism, African-American, and Latino commissions. He put a lot of hard work into getting the various commissions off the ground, and hosted two DSA-related conferences of over 100 activists and academics of color in the mid-1980s.   For various personal and political reasons, including some frustration that DSA's anti-racist work did not grow significantly stronger over time, Manning shifted some of his political activism to the Committees of Correspondence. Even so, he remained a warm and good friend of DSA; and an especially strong friend of the Youth Section (now YDS), speaking often at its summer and winter conferences.   Manning accomplished a tremendous amount in his 60 years, both politically and intellectually, and was that rare academic who never stopped being an active, political person. His work remains a major part of our heritage.
In the 1990,s Manning Marable was one of the five leading African-American activist to host a series of national discussions on organizing a movement of the Black Left. Out of the discussions emerged the National Black Radical Congress (BRC), founded on June 19, 1998.  Manning played a critical role in the formation and implementation of the Black Radical Congress (BRC), providing vision and leadership throughout the process.


Manning spoke at universities and colleges around the nation. He  used writings and lectures to address racism, sexism and classism in US; and specifically  in the Black community.  Manning’s powerful voice was heard clearly in such noted publications and books as: How Capitalism Underdeveloped Black America (1983), Black Liberation in Conservative America (1997) and The Great Wells of Democracy (2003), and in a political column, "Along the Color Line," which was syndicated in more than 100 newspapers. In every major Black newspapers, Manning political column “Along the Color Line” serve as a political beacon during the 80’s and 90’s. Manning life long scholarship and activism challenged the Left to address anti-racism work.

Manning  Marable  was an prolific scholar. He developed graduate programs for African American studies at several universities. Eventually he was the founding  Director of Columbia University’s Institute for Research in African-American Studies.  In his work Manning created a place where students could stretch their intellect in multidisciplinary  ways.  At the Institute he   served as an advocate and mentor for a generation of new scholars helping them to navigate the difficult paths to publication and achievement in universities around the nation. In doing this work he nourished an entire generation of new scholars.

Manning Marable’s final work, Malcolm X: A Life of Reinvention provides an excellent biography and a history of an era.  Marable spent the last ten years of his life working with students, interns, and others to write this remarkable work, published just days  before his death.
The book Malcolm X: A Life of Reinvention  includes a sharp criticism of the famous earlier work by Alex Haley, Malcolm X: an Autobiography (1965), written based on a series of lengthy interviews with Malcolm X.  Haley is also known for his writing of the book Roots that became a major television series. As Marable explains, the 1964 and 1965 versions of The Autobiography of Malcolm X presented Malcolm as he wanted to be present himself, his preferred public persona as edited and promoted by Alex Haley. The Autobiography became the primary script and for Spike Lee’s important film on Malcolm’s life and the book and film have in turn been our primary sources for understanding Malcolm and his role in Black politics. Marable provides extensive evidence that Haley left out three important chapters in order to promote his own view of Malcolm X.  Alex Haley was a moderate Republican.  His first two articles on Malcolm were for the Saturday Evening Post and for Playboy Magazine.  While Malcolm spoke primarily to a Black audience about the Black experience, the Haley book proposal and negotiations were clearly directed toward a primarily White reading audience of the 1964 era.
Manning Marable’s epic political biography reconsiders Malcolm in light of present information, released files, and evidence internal to the Haley autobiography.  Marable’s Malcolm X: A Life of Reinvention provides extensive context to aspects of Malcolm’s life and struggles within the African American community. Marable describes in detail the role of the Nation of Islam in U.S. ghettos, internal violence in NOI, and sexism within the Nation and in Malcolm’s personal life. He also describes significant transitions of Malcolm’s perspective from the Nation of Islam to the acceptance of a more orthodox Islam and Malcolm’s later Pan-African perspective, a significant political development of the era and a topic largely ignored in Haley’s work. Manning describes numerous additional important aspects of the interaction between Malcolm and the developing Civil Rights Movement and Martin Luther King Jr., with Trotskyists and socialists such as Grace Lee Boggs and many other important conflicts of the era. Malcolm X: A Life of Reinvention allows us to see Malcolm both as he wanted to portray himself and importantly in the historical context of subsequent developments in Black America.
DSA Honorary Chair Cornel West says of the book,
“Manning Marable is the exemplary black scholar of radical democracy and black freedom of our time.   His long awaited magisterial book of Malcolm X is the definitive treatment of the greatest black radical voice and figure of the mid-twentieth century. “
A similar tribute was published in the Fall 2011 issue of Democratic Left.

Posted by Duane Campbell at 9:13 PM