Thousands march for Education in California 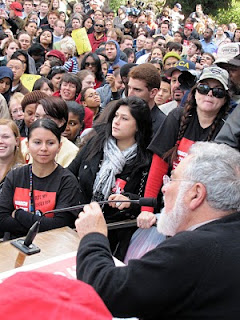 By Duane Campbell
Over  2000  union faculty, students and their supporters rallied at the California State Capitol in Sacramento on March 4,2010,  in support of adequate funding for public education , both k-12 and higher education.  The rally was one of more than 40 events across the state asking people to Stand up for Education.  Faculty and students came from U.C. Davis, Santa Cruz, and Berkeley, as well as CSU Sacramento, Chico, and  community colleges.  Rallies  and protests also occurred on other CSU,U.C.  and community colleges across the state.
George Lakoff,  well known  for his works on framing issues argued for signing petitions for the  California Democracy Act which would reduce the requirement to pass a state budget from the current 2/3 vote to a simple majority.
Lakoff asserted that the  demonstrations will mean little unless the California Democracy Act gets on the ballot by April 12 and passes in the November election. That is the only way that revenue can be raised to fund California's needs, including education. Lakoff criticized leaders of the California Democratic Party for not getting enthusiastically behind the initiative.
The California Democracy Act is simple. It changes just two words in the Constitution: "two-thirds" becomes "a majority" in two places. That's all. The initiative is one sentence long: "All legislative action on revenue and budget must be determined by a majority vote." It's simple democracy. And because it is a ballot initiative, a simple majority can bring democracy by eliminating the two-thirds vote requirements. The initiative has until April 12 to gather over 600,000 signatures of registered voters.  At present the campaign is far behind the required number of signatures.    Lakoff argued that an on-line campaign which would  ‘go viral” was needed to push the initiative over the required signatures.

Speakers at the Sacramento rally included students from each of the university systems describing their own experiences with budget cuts. Students, faculty, workers and public education supporters protested  deep cuts to education funding as a part of a  “national day of action”.    The California Faculty Association (NEA)  is one of the organizations that participated in  mobilization. CFA represents the faculty on the 23 campuses of the California State University.  CFA members, staff and allied students helped to organize many of the demonstrations.  Student lead demonstrations on  some U.C. campuses included brief occupations of buildings.
Protesters insisted that   public education and public services need to restore funding to meet the urgent needs of people. U.C. Regents voted to increase tuition an additional 32% in the fall of 2009, placing the in-state tuition at $10,302 for undergraduate work.  CSU tuition has increased 182% since 2002.   Meanwhile classes are cut as the universities have furloughed faculty. Students are struggling to get into classes that have been canceled.  Lack of classes causes many students to delay graduation for years, piling up an ever increasing debt burden.  A six year university education is much more expensive  for the state and for the student  than a four year education.
The  2008-2020  economic crisis has forced the cutting of higher education, of k-12 education, and of social welfare systems in the state and across the nation.     In 2007- 2008  major banks and corporations looted the economy creating an international meltdown.  Now, the banks  have been rewarded with bail out money from the tax payers.
The  protracted economic decline has had a devastating impact on the California budget- and the budgets of 42 other states.   Revenues have continued to plunge and  legislatures  have been forced to make a series of deep cuts to virtually all of the state's programs, including the university systems.
A frequent chant at the Sacramento  demonstrations was- “Make the bankers pay.” The crisis was not caused by students, teachers, public employees  nor recipients of social security.   Now states and cities suffer  cuts in public education,  in universities, in nurses, libraries and police protection.   School children did not create this crisis.  University students did not create this economic crisis yet they are expected to pay for the budget shortfall.
The Sacramento Local of DSA was an active participant in developing these demonstrations through our work with the Sacramento Progressive Alliance .  We have been working with unions and faculty groups since October.  We provided training, workshops, tabled on campus,  encouraged campuses in the three systems  to work together, and circulated the California Democracy Initiative on campuses.
Posted by Duane Campbell at 12:02 PM