March 4, Stand up for Education 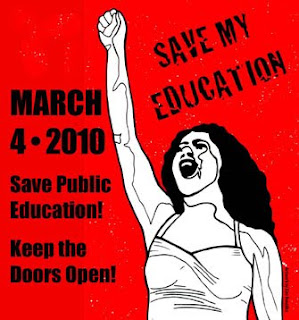 March 4, 2010.
Rally for Education
IT IS UP TO US !
JOIN THE SACRAMENTO RALLY FOR CALIFORNIA'S FUTURE! 11Am. North Steps. State Capitol.
Students and Faculty, will march to demand a decent budget for California’s schools and universities. Protests will occur around the state, at universities and work sites at the Capitol in Sacramento. Please join us.
The campaign for majority rule has a new web site.
http://www.ca4democracy.com/ Help us with signature gathering.
In the last two years California’s k-12 schools have received over a $16 Billion cut back. California presently ranks 45th of the states in per pupil spending and last among the states in class size. Now, the Governor proposes to reduce k-12 spending by another $2.4 Billion. The U.C’s and the CSU campuses have suffered over a $2 billion cut while tuition and fees were increased over 30%. Classes have been cut, graduation delayed, and faculty dismissed. They must not be cut more. We must work together to save public education.
Posted by Duane Campbell at 10:38 AM