"The actions that are being taken to weaken Endangered Species Act protections are an affront to the Tribal nations of the State of ,” said Mark Franco, headman of the Winnemem Wintu Tribe. “They violate the spirit of the treaties signed and consultative processes that California Indians have fought for centuries to ensure remain in place." 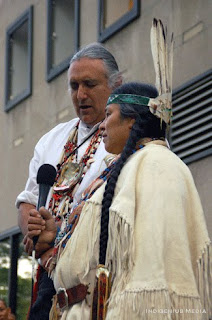 Photo of Mark Franco and Calleen Sisk-Franco courtesy of Indigenius .
By Dan Bacher
The Winnemem Wintu ( ) Tribe of northern  today joined environmental organizations and fishing groups in strongly opposing legislation sponsored by Senator Dianne Feinstein to waive Endangered Species Act (ESA) protections for imperiled Central Valley Chinook salmon.
Feinstein has attached an amendment to a jobs stimulus bill that would increase pumping to subsidized corporate agribusiness in the . The amendment would convert the “jobs bill” into a “job killer bill” that would result in the destruction of  and ’s once vibrant salmon fishing industry.
"The actions that are being taken to weaken Endangered Species Act protections are an affront to the Tribal nations of the State of ,” said Mark Franco, headman of the Winnemem Wintu Tribe. “They violate the spirit of the treaties signed and consultative processes that California Indians have fought for centuries to ensure remain in place. These proposed actions and the failure of the government to even once engage in any discussion with the first people of this state regarding water rights and needs of tribal reservations, rancherias and communities is offensive and a slap in the face of all people of this state who believe in the truth behind the bromide ‘one nation under god, with liberty and justice for all.’”
“I urge you to ensure that the voice of the ‘regular’ citizens of this great state be heard and that the voice of ‘big business and the almighty dollar’ be hushed so that you hear the voice of the salmon, for whom we speak, to penetrate your heart and mind, unpolluted by the words of those who only seek riches for themselves and nothing for their relatives,” emphasized Franco.
The legislation is being proposed as the tribe is planning to travel to  from March 19 to April 2, 2010 to conduct ceremonies to pray for the return of winter run Chinook salmon, now thriving in , to the .
“We are going to  to dance for the salmon and pray for their return, since it is the   salmon that live in the   in  now,” said Calleen Sisk-Franco, Chief and Spiritual Leader of the tribe. “They were taken there in 1875 from the . However, before we can even get enough money and all the clearances for our regalia for our trip, it looks like Senator Feinstein is cooking the books with Westlands Water District and will sell out all the water, leaving the salmon to die.”
Sisk-Franco urged everybody concerned about the fate of salmon and people to take action to stop Feinstein from ramrodding her salmon and job killer amendment through the Senate.
“It is more than just salmon that will die, for they are the climate changers,” said Sisk-Franco. “Senator Feinstein wants to kill them without even a thought of the imperative job they do for water and all life. Without them there won't be a prayer for pure, clean water.”
Rather than supporting legislation like this at the behest of agribusiness giant Stewart Resnick, owner of Paramount Farms, and the Westlands Water District, Feinstein should be introducing legislation that will restore salmon and other imperiled fish populations and fishing jobs. Central Valley fall Chinook populations collapsed to a new record low of 39,000 fish in 2009, the result of massive Delta water exports, declining water quality and other factors.
“Strong protections for the Delta ecosystem could help recover the salmon fishery, which would return $1.4 billion to the  economy and 94,000 new jobs to ,” said Jim Metropulos, Senior Advocate for the Sierra Club . “An amendment to waive the requirements under the federal Endangered Species Act could lead to the permanent closure of this fishery, with long-term job losses and economic damage. Such a suspension would likewise harm the Delta farmers who rely on clean Delta water to irrigate their crops.”
Besides sponsoring her job killer amendment, Feinstein is collaborating with Governor Arnold Schwarzenegger, Senate President Pro Tem Darrell Steinberg, Westlands Water District and the Metropolitan Water District in plans to build a peripheral canal and new dams. The peripheral canal is likely to result in the extinction of  salmon, Delta smelt, longfin smelt, green sturgeon, southern resident killer whales and other species that depend upon a healthy Delta ecoystem to thrive.
“The peripheral canal is a big, stupid idea that doesn’t make any sense from a tribal environmental perspective,” said Franco. “Building a canal to save the Delta is like a doctor inserting an arterial bypass from your shoulder to your hand– it will cause your elbow to die just like taking water out of the Delta through a peripheral canal will cause the Delta to die.”
There are three immediate things that you can do to save the salmon and the lives and jobs that depend upon them.
First, please ask your U.S. Senator to support  fisheries and fishing families by opposing Feinstein’s legislation. You can send a letter to your Senator by going to: https://secure2.convio.net/sierra/site/Advocacy?pagename=homepage&page=UserAction&id=3678&autologin=true&JServSessionIdr004=crzlmcxvh2.app225a
Second, Friends of the River urges you to call Senator Feinstein's DC office TODAY or TOMORROW, before 2 pm Pacific time at (202) 224-3841! If you get a busy signal, receive this email after her DC office is closed or would prefer to call one of her  offices you can reach her in  at (415) 393-0707 or  at (310) 914-7300.
Third, you can financially support the tribe’s trip to  by going to: bhttp://apps.facebook.com/causes/440954. All donations are greatly appreciated to enable the tribe to go on this historic trip!
For more information, contact: Caleen Sisk-Franco, Tribal Chief and Spiritual Leader, or Mark Franco, Headman, Winnemem Wintu Tribe, 14840 Bear Mountain Road, 530-275-2737 voice, 530-275-4193, fax 530-510-0944 mobile, http://www.winnememwintu.us.
Posted by Duane Campbell at 3:27 PM