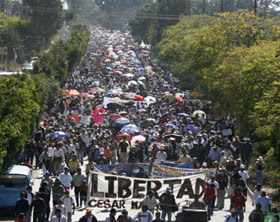 Minnesotans heed call for solidarity with Oaxacans
By Michael Moore
29 December 2006
ST. PAUL - The violent struggle in the Mexican state of Oaxaca – where the brutal repression of a striking teachers union last June sparked a series of demonstrations, uprisings and, eventually, partial federal occupation – inspires a wide range of emotions among the teachers’ supporters.
\Primarily, however, there is uncertainty, and that, in turn, yields anxiety.

Oaxaca Gov. Ulises Ruiz, who ordered police to assault the striking teachers, has refused to step aside, though an estimated 1.5 million people have taken to the streets in support of his removal.

Indeed, Mexican Teachers Union (SNTE) Local 22 is not alone in protest of Ruiz’s rule. The Popular Assembly of the Peoples of Oaxaca (APPO) formed shortly after the governor’s attack on the teachers, uniting them with representatives of the state’s regions and municipalities, its other unions and its non-governmental, social and cooperative groups.

The APPO began acting as a shadow government opposed to Ruiz’s, and it inspired enough support from Oaxacans to take control of the capital city’s central square, or zocalo, as well as the radio station at its university.

But on Oct. 31, after rumors of state-directed death squads and assinations made their way to the nation’s capital, Mexican President Vicente Fox ordered federal police and internal security agents to Oaxaca, with directions to recapture the zocalo. The raid was successful, but it resulted in warrantless arrests, beatings and disappearances.

Leo Garcia, an activist who returned from Oaxaca about a month ago, addressed the St. Paul Labor Speakers Club Nov. 27. He detailed 14 clashes between police and protestors at different points throughout the city.

“At some points the police began to shoot 9-millimeter guns into the crowd,” Garcia said. “Police squads fired on three youths, taking two of their bodies.”

For Garcia, anxiety has begun turning to despair.

“It’s kind of hard to see a social movement repressed into submission, which is what (the Mexican government) is trying to do,” he said. “Leaders are detained, there are warrants for others and people are in hiding.”

Garcia agreed with an organizer for the Minneapolis-based Resource Center of the Americas, Eduardo Cardenas, that renewed hope in Oaxaca depends on international interest.

“It seems that Oaxaca is in desperate need of international solidarity,” Garcia said. “Teachers unions and workers in different sectors need to step up.”

In St. Paul, public school teachers made solidarity with Oaxacan teachers a central theme of their union’s celebration honoring the anniversary of St. Paul teachers’ walkout 60 years ago. Still, demonstrations in front of the local Mexcian consulate here have been sparsely attended, according to Cardenas. Media coverage, meanwhile, has been almost non-existant.

That disappoints Cardenas, who still holds out hope – perhaps the most powerful of emotions – that the struggle begun by the Oaxacan teachers and carried on by the APPO will not be in vain.

“Beyond the teachers’ demands, this has larger implications,” Cardenas said. “Here’s a process being undertaken to create a democratic system where there has not been one.

“That’s very scary to a lot of people in Latin America who (fear) this could ecourage people to take on similar actions. But as scary as it is to people like Vicente Fox, it is inspiring for people in places like Colombia, who look at the people of Oaxaca as an example, creating a fair, more participatory society.”

Michael Moore edits the St. Paul Union Advocate, the official newspaper of the St. Paul Trades and Labor Assembly. Used by permission. E-mail The Advocate at: advocate@stpaulunions.org
Posted by Duane Campbell at 9:32 AM