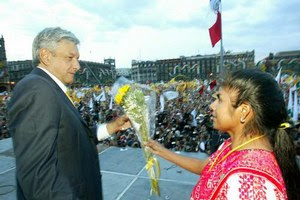 Another grassroots groundswell that mattered was the
immigrants' rights marches of last spring, which were
launched with the surprising turnout in Los Angeles --
not the easiest city for walking and marching -- of
more than a million Latinos and others defiant of
crackdowns against immigrants. Similarly huge and
passionate demonstrations, many organized by text
messaging, Spanish-language radio, and other means,
swept the nation. They demonstrated that immigrants
were not going to be so easy to bully; the force of
their numbers and passion left Republican plans to
repress and to demonize immigrants, undocumented and
otherwise, in disarray. The marches were jubilant and
powerful, one of those no-going-back moments when a
group decides never to be a silent victim again. The
culminating marches on May Day were the first time in
many decades that the U.S. had adequately joined the
rest of the world in commemorating this worker's
holiday that commemorates the anniversary of the
Chicago labor march and rally in 1886.

Mexicans rose up in 2006, and the country seems to be
on the brink of revolution, if citizen discontent is
any measure. The city of Oaxaca was seized by its
citizens and for many months functioned as an
autonomous zone akin to the Paris Commune of 1871,
until violent repression in November. After the stolen
presidential election in the summer, millions of
Mexicans took up residence in the streets of the
capital to protest the corruption and model an
alternative -- the huge occupation of the central
zocalo (or plaza) and surrounding area experimented
with mass democracy meetings in the open air, while
Andres Manuel Lopez Obrador, the Mexico-City mayor who
probably actually won the election, set up a shadow
government. The Zapatistas, a dozen years after their
appearance on the world stage, continued to play a role
in Mexican politics.