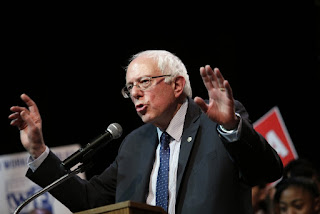 ON SATURDAY, caucus-goers began gathering around 10 a.m. at the Desert Pines High School in Las Vegas, Nevada. It had started raining early in the morning — a rare occurrence in Las Vegas — and didn’t lighten up until the rain stopped in the early afternoon.
The high school, whose mascot is a jaguar, is located in a predominantly Latino, working-class neighborhood. Almost all the caucus-goers were people of color. The school served as the caucus site for 12 precincts, divided between the cafeteria and the gym. None of the caucuses were very crowded; a precinct chair guessed that it was due to the heavy rainstorm earlier that morning — giant puddles spotted the courtyard — and huge early-voter turnout, with some 75,000 votes across the state coming early, compared with a total 86,000 people who caucused in 2016.
Sen. Bernie Sanders was projected as the winner early by multiple outlets, with former Vice President Joe Biden, Sen. Elizabeth Warren, and former South Bend Mayor Pete Buttigieg vying for second place. By Sunday night, with 88 percent of precincts reporting, Sanders led every other candidate with 47 percent of the county convention delegates. Biden is a distant second, ending up with around 21 percent of state-level delegates. And entrance polls showed that Sanders was the strong favorite among Latinos, earning 53 percent of their votes.

After the debacle of the Iowa caucuses, observers looked to Nevada with trepidation, but Sanders’s campaign remained focused on its major strategy of mobilizing Latino voters, who comprise nearly 30 percent of the state’s population. In the polls leading up to the caucuses, Sanders not only had an overall lead, but he was also the candidate with the greatest share of Latino support, at 33 percent. While Sanders’s polling numbers had remained consistent since the summer, he benefited from a slip by Biden, who was leading among Latino Nevadans at 34 percent in June but fell to 22 percent support this month. In 2016, Sanders received 53 percent of the Latino vote in Nevada. Voters, including Dan and Elvia Baca, check in for the Nevada Democratic Party caucuses at Desert Pines High School in Las Vegas on Feb. 22, 2020.Photos: Krystal Ramirez for The Intercept
This year, Sanders redoubled his efforts to win their votes, not only focusing on turnout, but also organizing specifically for the caucuses. Those efforts — such as holding trainings in Spanish and providing translation services at the caucuses — appear to have paid off. One such training — for the “Strip” caucuses located on Las Vegas’s famous main drag so that hotel and casino workers can attend — took place Thursday night at the offices of Make the Road Action, an immigrant-rights group. Conducted entirely in Spanish, a young volunteer explained what a caucus is and how it works. The group concluded the training with a mock caucus, where they voted between prominent Sanders surrogates such as rappers Cardi B and Killer Mike.
In his victory speech from San Antonio, Texas, Sanders highlighted the support his campaign got from the group. “I wanna thank Make the Road and all of the grassroots organizations that helped us win there,” he said.

Bernie Sanders’s Secret to Attracting Latino Support: Talking to Them

Sanders’s win is also thanks to young Latinos like 19-year-old Christopher Santoyo, who told The Intercept that he’s been volunteering for Sanders since he was 15 and worked to convince his family to caucus for the candidate.
“At first, they actually didn’t like him,” Santoyo said. “But I think based off the fact that I’ve been so involved in his campaign, and I’m directly reaching out to them telling them to vote, they’re supporting Bernie Sanders.” He walked some of his family into early-voting locations and said he now has elder relatives from coast to coast supporting Sanders.
When asked whether he thought other young people are convincing their parents to vote Sanders, Santoyo said, “One hundred percent.”
“I think these ideas are so radical to them. Like free college or a Green New Deal, Medicare for All. And then when you actually have a serious conversation as to seeing it through our lens, they really start to change.”
“A lot of them, especially my family specifically, they’re Latino so they listen to Telemundo, Univisión, and more corporate media. And they kind of echo those talking points. But when I fight back on it, they’re like, ‘Oh wow, you’re right,’” Santoyo said. “If you really speak to them, their mind will change.”
The Intercept.
Ed. note.  Sanders also has the most progressive immigration policy of any of the candidates.  by far !