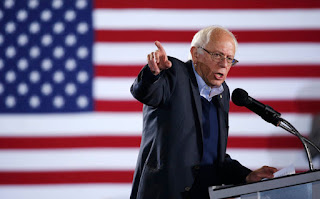 In a previous analysis, I noted that Bernie Sanders is a clear favorite among Latino voters in California. A recent study by The Latino Community Foundation shows that young Latinos have an even stronger preference for Sanders, with over two-thirds rating the senator favorably. The favorability gap between Sanders and the other Democratic contenders is significant, yet all are evaluated higher than Donald Trump. Interestingly, the data show a significant gender gap when it comes to Donald Trump.
Latinas rate Trump unfavorably by 83 percent, while male Latinos rate him unfavorably by 69 percent—a 14 point gap. Regrettably, Elizabeth Warren, the top remaining female candidate, has failed to use this to her advantage. In fact, Warren is rated less favorably by Latinas (44 percent favorable) than by Latinos (52 percent favorable). Given the high stakes of the California primary, the failure of key Democratic candidates to reach out to young Latinas may prove to be a strategic mistake.

Moreover, young Latinos are advantaged because they are overwhelmingly U.S.-born citizens. A lack of citizenship has long stymied the growth of the Latino electorate. That barrier is eroding as the balance of power shifts toward younger voters. Capitalizing on their numbers and energy could prove to be decisive in determining the winner of the Democratic presidential primary. Presently, one candidate appears to be doing just that—Bernie Sanders.
Sanders’ lead among young Latinos is due to his policy issues, the establishment of offices in Latino communities, hiring significant numbers of Latino staff and receiving endorsements from influential Latinos. He is offering a blueprint that others should follow for winning young Latino voters and the wider Hispanic electorate.
***
Adrian D. Pantoja is a Professor of Politics at Pitzer College and Senior Analyst for Latino Decisions.
Posted by Duane Campbell at 8:32 PM