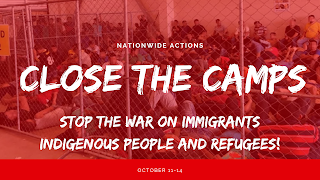 National campaign to Close the Camps- October. DSA in conjunction with Close the Camps and other groups. DSA’s Immigrant Rights Working Group asks all chapters to mobilize demonstrations against the migrant detention centers. See-
http://closethecampsoct.org


Stop the War on Immigrants --
A Call to Action on October 12
From the day he took office, Donald Trump escalated a failed and cruel immigration policy into
an all-out war against immigrants, banning Muslims, slamming the door on refugees, tearing
children from their parents' arms.
Each new affront has been met with outrage and protest, but even when he has retreated, Trump
has sought new lines of attack: concentration camps, workplace raids, new bars to green cards
and citizenship.

Meanwhile many immigrants are being terrorized in their own communities, afraid to answer the
door, take children to school, or go to work. These communities need to see and feel the
solidarity of the majority that stands with them.
We call on all those who oppose the raids, family separation, deportations and incarceration to
unite against this reign of racist persecution.
It is time to say, "¡Basta Ya!" Enough is enough!
This indigenous people's day weekend let us act together --whether with a march, vigil, rally or
direct action-- against those who would give us a future of division and white supremacist hate.
Let us unite in broad regional coalitions drawing together people of faith, unions, anti-nativist
fighters and other progressives to target camps, jails, shelters or other parts of Trump's
anti-immigrant, deportation machinery.
Let us act in the knowledge that no human being is illegal anywhere, not least in a country
formed through violent colonialism.
Most of all let us open our arms to immigrants in our country or at our borders with a greeting of
friendship:
Mi casa es tu casa.


Our home is also your home
See example from Los Angeles DSA.
Posted by Duane Campbell at 1:38 PM