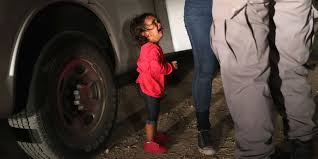 Resistance Now!
DSA Immigrants Rights Committee launched a week of action to Abolish ICE as a part of the many demonstrations occurring around the country in opposition to the Trump Administrations policies and incompetence. #AbolishICE

Brandon Ramirez, co chair of the Immigrants’ Rights Committee hosted a Zoom dialogue last night, June 21, with over 50 DSA members participating from chapters around the country to mobilize DSA chapter responses to the crisis. Speakers included Maria Svart ( DSA) , Linda Sarsour ( Women’s March) and with participation from community based groups Mijente and Cosecha among others.

Each agreed that the current situation was intolerable. You can’t end the separation of children by locking up the entire families as Trump has ordered in this Executive Order. We will not permit it. Allied groups called for participation in the several national efforts including the June 30 Families Belong Together demonstrations by the ACLU, Move On and othershttps://act.moveon.org/event/families-belong-togetherand the Women’s March June 28 in Washington D.C. https://endfamilyseparation.us

Several DSA activists and DSA chapters reported on their work including the confrontation in Washington D.C. with Homeland Security Secretary Kirsten Nielsenhttp://antiracismdsa.blogspot.com/2018/06/homeland-security-secretary-nielsen.html
DSA activists reported from Texas and the border area on the conditions that migrants already suffer from including arbitrary arrests, detentions, and deportations.

The call is for DSA chapters and members to participate in the major marches and to organize active resistance events during the week of June 24-30 calling for the abolition of ICE as a terrorist organization. Chapters were encouraged to engage in the actions they found appropriate based upon the chapters own organizing capacity. Call participants were engaged by the rapid response conference while over 30 chapters made plans for actions and to coordinate their future work.

You can join the Immigrants’ Rights Committee here
https://docs.google.com/forms/d/e/1FAIpQLSe7YbhFhJerizQ2qoRh0FnBcukQBbKKeewwoKVlYRlu-FP5Lw/viewform

You can e mail the Immigrants’ Rights Committee atdsa.immigration@gmail.com

campd22702@gmail.com
When we are really honest with ourselves, we must admit that our lives are all that really belong to us. So it is how we use our lives that determines what kind of people we are. ..I am convinced that the truest act of courage..is to sacrifice ourselves for others in a totally nonviolent struggle for justice.
Cesar Chavez (1927-1993)
Posted by Duane Campbell at 10:38 AM