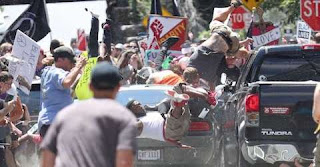 In 2016, things fell apart. The center lost its hold, and the worst of the far Right, full of passionate intensity, seemed poised to loose their blood-dimmed tide upon the world. With cracks suddenly appearing in the free-markets-and-phony-multiculturalism orthodoxy, Luxemburg’s old question was suddenly, shockingly, back on the table: socialism or barbarism? And it appeared barbarism had a considerable head start.
Four years ago, I was a groom’s maid in my dear friends’ wedding in a little chapel in Charlottesville. I’d spent many happy, moon-shining nights talking and walking the streets of the college town, 45 minutes from my home in Richmond, VA. When I learned armed fascists, confederates, white nationalists, and sundry other scum, emboldened by the pandering faux-Bonapartist businessman in the White House, were descending en masse on the community, I was no longer thinking about long-game Left strategy. I only knew we all had a duty.
The morning of Saturday, August 12th was drizzling and miserable when our crew from the Richmond DSA chapter set out. By the time we met up with other DSA chapters in Charlottesville, the storm clouds had cleared. After precautions, plans, and red armbands were shared, we set out for Emancipation Park. A comrade handed me a button that read, “No Race But Human.”
Emancipation Park – teargas? Cops or Nazis? Hard to tell.
Unlawful assembly declared –
Better move to McGuffey Park.
Pass the darkened windows of twee little shops, their handpainted sandwichboard signs folded up like sleeping birds.
Anti-capitalista! Anti-fascista!
Regroup.
Everyone’s offering water bottles,
but everyone has to pee.
Several people lie on stretchers in medic tents.
Now down the block, at the corner of Market Street –
They pass by:
Doughy boys in white polos with floppy Nazi haircuts sweated to foreheads
Colonel Sanders klansmen in bulletproof vests
White knight LARPers with Celtic cross shields
Olde Europa-fetishists shouting slurs at immigrants
(I wonder how many of their ancestors were spat at, dragging through Ellis Island, not yet considered white.)
There are some grizzled old bigots, but mostly, they’re startlingly young,
the glaring sun revealing on their faces the sallow stamp of 4chan and closed circuits of hate.
August Bebel once called the proto-fascist anti-Semitism of his day “the socialism of fools,” and rarely have I seen such fools as on that street.
They looked like little puffed-up cowards – fractured consciousnesses adrift in this viciously competitive, alienating, spiritually barren capitalist society that gambled away our future on speculative markets, leaving us stuck with a present in foreclosure.


In search of some kind of heart in this heartless world, they got hooked on the opium of the neckbeard: frothing, frustrated misogyny, paranoid xenophobia, and elitist fantasies of the essential, primordial greatness of “their race” that would be simply pathetic if they weren’t in lockstep continuity with great historical evil.
And they are cowards: the Right always are.
Reactionary huddling in your racial bunker is easy;
transforming the whole world is hard.
The neoliberal elites wringing their hands now that they’ve finally seen the ugly face under the mask of their status quo need to know: they bred these monsters. Now we the people are going to have to defeat them.
No Trump! No KKK! No fascist USA!
Black lives matter!
Whose streets? Our streets!
We’ve held the corner for a while, drowning out the fascists’ bile until they’ve passed…
I look behind me.
Armored-up cops looming at the top of 2nd Street.
Better fall back to McGuffey – the park joins the DSA in song:
In our hands is placed a power greater than their hoarded gold,
Greater than the might of armies, multiplied a thousand-fold
We can bring to birth a new world from the ashes of the old…
DSA members move as a red-lined group to the First United Methodist Church to use the bathroom, drink water, and take a quick breather –
Clergy, volunteers, bystanders, Charlottesvilleans thank us for being here, they thank us for helping them protect their community, for standing up to the fascists.
I can’t remember the last time avowed socialists in the US were thanked for anything –
Things are changing.
And then as we’re leaving, I hear a noise, look back down the sidewalk over my shoulder: a truck with the bed full of armed Nazis had attempted to careen into the church parking lot, but Antifa is chasing them off.
Things are changing.
Every car-sound now snaps my head to attention, sets my nerves on edge. Like most trans women, I know how it feels to be hyper-vigilant walking the streets, but I’ve never had to scope out every passing vehicle for Nazi shields and assault rifles.
We get a tip that some fascists are headed to terrorize the residents of Friendship Court, a nearby affordable housing neighborhood.
DSA, Black Lives Matter, and others march off,
form a mass at the south side of the neighborhood, ready and waiting to help out the community, but it looks like the fascists came from the north and the residents let us know that they’ve defended themselves.
Another mass of counter-protestors are streaming down Water Street, singing and chanting –
We head up 2nd Street and join them.
Looking around me, I feel so proud, and so I feel so much love. I have not been with the Democratic Socialists of America long. Most people I was marching red-banded-arm-in-arm with, I had only met for the first time that morning. But I knew that everyone there had my back, and I had theirs. Because no matter what eternal-white-essence claptrap the racists peddle, solidarity is thicker than blood. What you are is irrelevant next to what you do, what struggle you undertake to make this world a truly just and free place. The fascists, for all their intimidation games, are bound to lose: they’ve lashed themselves to the mast of their sinking ship of defensive, divisive, particularistic Being, but we, the democratic Left, are the very wave of Becoming, and with our tide rises limitless human possibility. I look down at that button pinned to my vest: “No Race But Human.”
Marching with my comrades down Water Street, we felt the power of people united in a common cause crackling through us. I understood then solidarity is not some tired cliché from old union songs: it’s the real movement of the masses clenched into the fist of history.
And then, just as we reached the corner of Water Street and 3rd, sounds I can’t describe echoed through every eardrum.

At the time of writing, the Internet Nazis, not content to mock and insult the comrade they murdered, want to send their goons to Heather Heyer’s funeral service.

“Not even the dead will be safe from the enemy, if he is victorious.”
– Walter Benjamin