Berry Pickerts Want a Union and a Raise 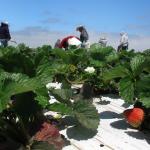 Some of the farmworkers who make it possible for U.S. consumers to have berries for breakfast are paid about $6 a day. Those farmworkers include children toiling for 12 hours a day at 85 percent the amount of money that adults get paid. Many farmworkers do not get lunch and rest breaks and are subjected to terrible housing conditions.
Hoping to rectify these issues, farmworkers in the United States and in Mexico have been on a three-year-long fight to get Driscolls — the world’s largest berry distributor — to recognize their unions so that they could have better working and living conditions. And now they’ve taken their complaints on the road in a month-long protest tour along the west coast.
Ramon Torres, a 31-year-old Mexican immigrant, is one of the people leading the fight to unionize. As the president of the independent farmworker union Families United for Justice (FUJ), he has been picking berries since he was 18 years old. His most recent employer was the Washington state-based Sakuma Bros. Farms, which supplies its products through the Driscoll’s label. Through the years, Torres has seen and experienced many hardships, like wage theft, lack of rest breaks, and cramped housing conditions. By law, his employer has to provide housing for migrant farmworkers like Torres. But the cabins often hold three times as many people as they should.
“They give us sheets of plastic to prevent the rain from coming into the cabin, so all we get is a flimsy piece of plastic for the roof,” Torres told ThinkProgress in a phone interview, explaining that there can be upwards of 14 people in each cabin meant for five people. And the mattresses are often torn and dirty [1], with cockroaches and rats running around.

They give us sheets of plastic to prevent the rain from coming into the cabin.
About 1,500 miles away at another Driscolls-operated farm in San Quintin, Mexico that’s packaged through the BerryMex [2] label, Gloria Gracida Martinez, a former farmworker and the spokesperson for their farmworker-led union La Alianza, has seen similar instances of poor working conditions crop up.
Driscoll’s partnership with BerryMex and MoraMex yielded 25 million flats of strawberries to the U.S. in 2014, The Nation reported [3]. But for all that the companies have monetized in Mexico’s $550 million annual berry harvest revenue, Mexican farmworkers aren’t seeing a comparable increase in their working and living conditions.
Instead, Gracida Martinez recounted the stories of farmworkers who have had to deal with wage theft, children as young as 12 being put to work, and even people who were shot and beaten for trying to form a union.
“A year ago, what we were asking for was the basic salary of 300 pesos — that’s roughly about $16 a day,” Gracida Martinez told ThinkProgress in a phone interview, indicating that the union demands weren’t extravagant, but rather a way to give dignity to workers. “To this day, we’re still getting paid roughly $6 a day for an average day’s worth of work that’s maybe 12 hours or more.”
Gracida Martinez also recalled the story of Lorenzo Rodriguez, a 26-year-old farmworker who told her, “My back aches as if I was very old…When there’s lots of fruit in the fields, they turn on the lights of all the buses when there’s no more sunlight so people can keep working.” 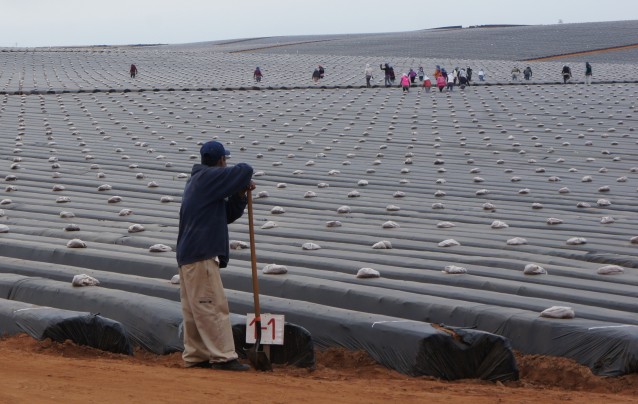 In this Sept. 25, 2014 file photo, day laborers work in a strawberry field as they prepare the field for planting in the Valle de San Quintin in the municipality of Ensenada, south of Tijuana in Baja California, Mexico. AP Photo/Omar Millan
For the past three years, Torres, Gracida Martinez, and other activists have been fighting hard for unionization efforts for farmworkers supplying berries for Driscoll’s in the United States and in Mexico. In 2014, workers in Washington state went on strike after complaining that the piece-rate wage was set too low, but Sakuma Farms allegedly brought in hundreds of guest workers under a H-2A visa program to replace the strikers, The Progressive [1] reported.
“The way the economics work with seasonal workers — some workers are only available in the summer and they need their kids to work because they need to pay rent, “Andrew Eckles, FUJ boycott coordinator, explained to ThinkProgress. “The children can be paid 85 percent of the minimum wage, which is $9.49 in Washington state. But some of them are subjected to wage theft. Without lawyers, many [farmworkers] saw that they were getting $100 taken out of their checks.”
Eckles added that workers who lodged complaints with their supervisors were ignored or intimidated. Worse, farmworkers who only spoke indigenous languages “were unable to bring complaints forward.”
Mexican farmworkers made headlines last year when Mexican President Enrique Peña Nieto announced a national program called “México con Trabajo Digno [4]” with the mission of protecting and guaranteeing human rights for Mexican workers. Mexican government officials even praised [4] the program for helping to move farmworkers away from slave-like conditions. And Driscoll’s released a statement last year indicating it is committed [5] to “positive worker welfare and stronger communities in Baja Mexico.”


Many of our older people have died without justice.
But organizers stated that negotiations still haven’t moved forward. So the union organizers are trying again. On Thursday, Torres’ group, comprised of about two dozen activists, held a protest at Driscoll’s Headquarters in Watsonville, California where they demanded to negotiate a union contract with Driscoll. The workers were there as part of a 28-day tour on the west coast to win union contracts [6] for berry pickers in Washington state and San Quintin, Mexico.
It still remains to be seen whether the boycott outside Driscoll’s headquarters could result in higher wages and better conditions for farmers. “Many of our older people have died without justice,” Gracida Martinez said. “They gave all their strength and life to the field and they … were enslaved. Just one question to Driscoll’s — how can Driscoll’s justify paying people $6 a day for over 12 hours of a day’s work?”
Esther Yu-Hsi Lee is the Immigration Reporter for ThinkProgress. She received her B.A. in Psychology and Middle East and Islamic Studies and a M.A. in Psychology from New York University. A Deferred Action for Childhood Arrivals (DACA) beneficiary, Esther is passionate about immigration issues from all sides of the debate. She is also a White House Champion of Change recipient. Esther is originally from Los Angeles, CA.
Like this article? Support Think Progress with a donation by clicking here [7].