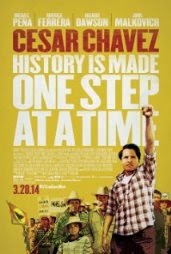 Cesar Chavez, a feature film on the farmworker leader, was previewed in Berkeley on March 5 prior to its March 28 national release. Based on the audience response, the film will help inspire a new generation of young activists to push for social justice, and will particularly resonate with Dreamers and others pushing for immigration reform.
The atmosphere was electric in Berkeley’s California Theater as a full house waited in anticipation for Diego Luna’s new film, Cesar Chavez. A block long line of people were turned away, reflecting an interest in the movie that Luna hoped would return when the film is released in three weeks.
Having spent years researching and thinking about Cesar Chavez for my book, Beyond the Fields: Cesar Chavez, the UFW, and the Struggle for Justice in the 21st Century, I was intrigued by how a feature film would handle the long and complex story of the farmworkers movement. And I think it covered the story of Cesar Chavez himself remarkably well for the years covered in the movie.
http://youtu.be/awP3yXv-4ng

Cesar Chavez’s rise from a young boy carrying cantaloupes in the fields to one of the nation’s leading labor and social change leaders is a story that almost defies belief. Among the film’s great strengths is its focus on how Chavez overcame seemingly insurmountable obstacles to build California’s farmworker movement.
No film on historical events can provide the detail and nuances of a book, and in this case the facts overlooked was the critical role of other key leaders in the UFW’s rise.

Dolores Huerta and Fred Ross, Sr. are given very small roles, and the latter’s role as a mentor to Chavez is not depicted. Former UFW Organizing Director Marshall Ganz is not even in the movie, which also excluded were key organizers like Jessica Govea, Eliseo Medina and Leon Chatfield, to name just a few.
As my own book argues, Cesar Chavez was a great organizer and leader, but it took other key leaders and a movement to build the farmworkers movement. Focusing so much on Chavez does not then explain the movement’s decline (not shown in the movie), which followed the departure of other key figures.


An Inspiration to Young Activists

The film should prove a great inspiration to young activists. Latinos involved with the Dreamers and immigrant rights movement should make this film required viewing. In fact, anyone working for progressive change against powerful corporate interests will leave theaters showing the film more committed and dedicated to their struggle than when they went in.
Movies that inspire social change activism are not exactly common in Hollywood. Most films like this are documentaries. I think the filmmakers made the right decision in making a film that hews to the truth, includes historical news clips and footage, but uses actors to dramatize a mass movement.
While I wanted to see more examples of young people handing out “Boycott Grapes” fliers in front of supermarkets, as well as more rallies, protests and strategy sessions, director Luna likely realized that repetition dulls the power of these images. Cesar’s pilgrimage to Sacramento, his fast, and his conduct toward growers are vividly demonstrated, and the scenes with the great UFW ally Robert Kennedy are some of the most powerful in the film.
Thanks to the UC Berkeley based Center for Latin American Studies for sponsoring the film’s preview. Be sure to see the film when it reaches theaters on March 28. It will have you shouting “Si Se Puede” as the credits roll.

Randy Shaw is Editor of Beyond Chron, where this review originally appeared. His new book is The Activist’s Handbook, 2nd ed.: Winning Social Change in the 21st Century
Posted by Duane Campbell at 11:58 AM