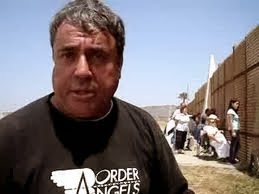 INTRODUCTION - There is probably no one who can speak to the citizenry from a greater moral high ground than Enrique Morones from Border Angels.  He has been at the forefront on the ground for over a decade offering humanitarian aid to the sick, elderly, young, and dying migrants attempting to cross the Mexico-United States border in search of a new and better life than the one they left behind.  His work became ever more urgent with the imposition of Operation Gatekeeper in 1994 thanks to President Bill Clinton and Senator Diane Feinstein.  More than 10,000 migrants have perished since that inhumane policy was enacted.  Enrique has become the nation's moral conscience on the border.  This is what he has to say about immigration reform and the urgent tasks of the day.
THE HERMANDAD FAMILY.

The U.S.-Mexico border has never been more secure, but we still hear from many people: "Secure the border!" "Get in line!" "Citizenship for all."

We rarely hear from the migrants themselves. Not only do I hear from them everyday, I also see them daily - both dead and alive. For the past several months we have had a growing coalition asking for a piecemeal approach to humane immigration and not the militarized version being offered now. The migrant community wants the Dream Act, DACA (Deferred Action for Childhood Arrivals), to process those already in the system and passage of the agricultural jobs bill. This would qualify more than 4 million of the current 11.5 million undocumented people in this country today.

When most of our forefathers and foremothers came to this country, there was never any question of legal vs. illegal. They just came. Many even had a statue welcome and encourage them. "Give me your poor, your tired, your huddled masses."

Today's "migrants" from south of the border don't have a statue. Instead, they have a wall. More people are being deported or leaving willingly than ever before. And there has been a dramatic decrease in unauthorized migration over the past several years. The U.S.-Mexico border is secure.

We often hear "Get in line," even though there is no line for most. If you do not meet a certain income level, if you do not qualify for a visa, there is no line. So you either have to see your family starve or you cross into another country looking for work to be able to feed your family - just like the current 250 million people around the world living without documents in a country not their own.

Here in the United States, there are 11.5 undocumented people. About 35 percent came from Europe, Asia and other parts of the world with a student, work or tourist visa. These people of means did not leave the country after their visas expired. The other 65 percent of the 11.5 million undocumented people in this country did not qualify for visas so they risked everything crossing the deserts, mountains and waterways. An estimated 10,000 human beings have died crossing the border (since 1994 when Operation Gatekeeper was established) with the intent to feed their families.

Regarding citizenship, not one of the thousands of migrants I have spoken to in the past two decades has stated citizenship is a deal breaker in the immigration debate. They all want to be documented, yes. But not necessarily citizens. Not yet anyway. Just like the millions of residents who qualify yet don't do it.

What this country needs and what migrants want is a humane, secure immigration system. This country is great in large part because of our diversity. Let's keep that dream alive in actions not just in words.

Morones is founder and executive director of Border Angels (www.borderangels.org)

Posted by Duane Campbell at 2:17 PM