Hernandez may run for Congress again. 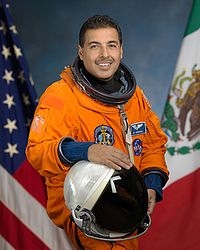 MANTECA - Former astronaut Jose Hernandez said he is still considering a second run for Congress in 2014, nearly six months after a loss to Republican incumbent Jeff Denham, R-Turlock.
Hernandez might throw in his chips even as the Democratic campaigning committee has already chosen another candidate.
Hernandez said he couldn't make the commitment within the committee's timeline because his decision hinges on whether he can afford to take a year off work to concentrate on campaigning.
The electrical engineer and aerospace consultant is hoping his consulting contracts can accumulate enough resources by fall before taking the leap.
"If I was independently wealthy, I would have announced the day after the (2012) election that I would run for 2014," Hernandez said. "I have five kids, one in college. I have to make sure my family is well taken care of, that I'm able to give my kids a good college education, that I'm able to put food on the table and pay the mortgage.
"One thing is for certain: I'm here to stay in the Valley," said Hernandez, who moved to Manteca from Houston to run for office after completing an outer space mission for NASA. "I quit my job as an aerospace executive and decided to dedicate 14 months without pay to run for the 10th Congressional District. Although we came very close, we just couldn't win the election."


Hernandez, a San Joaquin County native and longtime resident before moving to Texas for his career, said it was always his intent to come back and serve the Valley, as well as be close to relatives.
But the Democratic Congressional Campaign Committee has recruited Michael Eggman of Turlock for the next race to attempt to unseat Denham, a businessman, farmer and military veteran.
His campaign manager, Eric Goldman, said Eggman can relate to farmers and the people in the district.
Stockton Record.
What the Democratic Campaign Committee ignored in their decision.  When a candidate first runs for office it  requires considerable time, energy and funds to get known in the district.
If Hernandez decides to run again he will have already acquired a base from the first campaign.  This is the kind of decisions that professional campaign consultants make.  It ignores the role of the growing Latino electorate.
See more.  https://sites.google.com/site/chicanodigital/home/table-of-contents/jose-m-hernandez
Posted by Duane Campbell at 4:36 PM