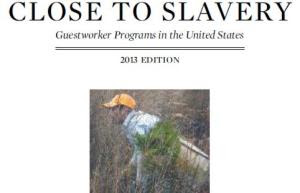 Those who wish to expand the current system of bringing temporary workers to the United States via guest worker programs might want to heed the warnings of The Southern Poverty Law Center (SPLC) and their new report, “Close To Slavery.” The report documents the abuses experienced by workers in this flawed system, something former House Ways and Means Chairman Charles Rengel called “the closest thing I’ve ever seen to slavery.”

THE PROGRAMS
Two of the most used types of guest worker visas are the H-2A for agricultural workers and H-2B for non-agricultural workers.  Both systems have deep flaws that lead to a pattern of abuse though some regulations have been put in place to prevent abuse of the H-2A. These include a “three-quarters guarantee” ensuring workers will get to work at least three-quarters of the hours stated in their contract, prevailing wages determined by the DOL, and reimbursement of expenses.
H-2A workers also are legally entitled to:
• Receive at least three-fourths of the total hours promised in the contract, which states the period of employment promised (the “three-quarters guarantee”);
• Receive free housing in good condition and meals or access to a cooking facility for the period of the contract;
• Receive workers’ compensation benefits for medical costs and payment for lost time from work and for any permanent injury;
• Be reimbursed for the cost of travel from the worker’s home to the job as soon as the worker finishes 50% of the contract period. The expenses include the cost of an airline or bus ticket and food during the trip. If the guestworker stays on the job until the end of the contract or is terminated without cause, the employer must pay transportationand subsistence costs for returning home;
• Be protected by the same health and safety regulations as other workers; and
• Be eligible for federally funded legal services for matters related to their employment as H-2A workers.17

H-2B workers are not afforded the same protections. The Department of Labor recommended new regulations for H-2B Visas in 2012 but they have yet to be implemented as they have been met by resistance from employers and members of Congress who wish to keep the H-2B program as a cheap labor supply chain.  A series of lawsuits have even challenged the DOL’s authority to regulate the H-2B program.
If allowed to be put in place, the suggested regulations would limit several of the widespread abuses of workers:
Under the 2012 regulations, H-2B workers:
• Would be reimbursed for the cost of travel from the worker’s home to the job as soon as the worker finishes 50% of the work period provided in the job order;
• Would be reimbursed for any visa processing fees in the first work week;
• Would receive the “three-quarters guarantee”;
• Could not be charged recruitment fees, which decreases the likelihood of working conditions akin to debt servitude; and
• Would be expressly protected from human trafficking and retaliation.
Regulations that would require employers to pay for visa and travel-related fees were suggested to prevent temporary workers from starting off in debt that leaves them just as exploitable as they were from whence they came.  This is one of the most common complaints about guest worker programs.  The SPLC study shows that guestworkers arriving in the United States typically face a fee-related debt ranging from $500 to well over $10,000.  Much of the debt comes from exploitative practices of recruiters in the workers’ home countries. The debt often comes at high interest and often leaves the worker in a situation where they can not make enough money during their contract to pay off the debt accrued in taking the job. It is shameful.
Further, the recruitment of temporary workers in both programs is often mired in dark ties to political power in developing regions. Before being exploited in the United States, temporary workers have often been exploited several times over back home. Workers often face threats of violence along their path to the United States.  The SPLC looked into the example of workers supplied to Candy Brand, an Arkansas agriculture company which began hiring Mexican temporary workers from the Tabasco region in 2003:


In Michoacán, a powerful, local family controlled the recruitment of Candy Brand workers. According to workers’ testimonies, the recruiters routinely charged them between $275 and $375 in fees just to have their names placed on a list of eligible workers. Workers from the Mexican state of Tabasco were not only required to pay a similar fee by their local recruiter, but were further extorted by one of the Michoacán recruiters. This recruiter met the workers in Monterrey after their visas were issued and demanded that they pay him an additional $1,000 just to have their visas and passports returned to them.
“He held my passport up in the air and threatened to cut it if I didn’t pay him. I didn’t have all of the money he asked for but he gave me back my passport on the condition I would pay the rest of the money to his son in the United States after I started working for Candy Brand. The recruiters threatened to kill my wife and children in Mexico if I didn’t pay,” said Juan Pablo Asencio Vasquez, a worker from Tabasco.

Nor did arrival in the United States represent a positive change of fortune:


Many workers arrived in Arkansas deeply in debt. On top of that, their U.S. employer failed to reimburse the workers for their travel and visa expenses and did not pay them overtime or the applicable wage in accordance with the law.
With limited economic opportunities in their hometowns in Mexico, many workers knew that they were being cheated by the company year after year but felt they had few other viable options for making a living, enough money to repay their debt, or leave their employer and become undocumented,risking their ability to return to the United States in the future to work. Tethered to a single employer and often unable to return home due to crushing debt, guestworkers are extremely susceptible to debt servitude and human trafficking.


This (misclassification) occurs most often when workers who should be characterized as H-2A workers (because, for example, they are picking produce in the field) are instead brought in as H-2B workers (and labeled as packing shed workers, for example). This results in workers being paid substantially less than the wage rate they should lawfully be paid. It also results in the workers being denied the substantially better benefits and legal protections afforded to H-2A workers, such as free housing and eligibility for federally funded legal services.


Again, there is virtually no recourse for a worker in this circumstance because the DOL generally under-enforces these kinds of abuses and H-2B workers are ineligible for federally funded legal services.

These exploitative practices have a net negative effect on the American economy.  Employers fail to pay workers standard wages and workers frequently wind up making less than the $7.25 minimum wage.  One of the flaws of the H-2A program is that even when correct wages are paid they are often set too low due to the USDA and DOL’s “adverse effect wage rate (AEWR).”  The SPLC details the process that leads to the AEWR.


“First, the USDA survey that DOL uses for the AEWR measures the average wage rates. Employers that have a hard time finding U.S. workers should compete against other employers by offering more than the average wage to attract and retain workers.

Second, the AEWR is based on the previous year’s wage rates and does not reflect inflation.
Third, the USDA surveys of the average wage include the 55% or more of farm workers who are undocumented, so the wages are depressed compared to what they would be if only U.S. citizens and authorized immigrants had the job. In addition, the AEWR’s, by themselves, also do not prevent employers from imposing very high productivity standards that desperate foreign workers will accept but that would cause U.S. workers to insist on higher wages.


In addition, the AEWR’s, by themselves, also do not prevent employers from imposing very high productivity standards that desperate foreign workers will accept but that would cause U.S. workers to insist on higher wages.”

RECOMMENDATIONS
The recommendations that come from the SPLC report are broken into three main sections:
1) A call to strengthen federal laws and regulations protecting workers from abuse.


– Congress should limit employer use of guestworker programs, particularly during periods of high unemployment. As long as guestworkers are available to employers regardless of the stability of the U.S. economy, employers will have a disincentive to hire
U.S. workers.


– Congress should regulate the recruitment of foreign workers. There is virtually no oversight of international recruitment activities, and the result is rampant fraud and abuse. To combat those abuses, Congress should create a federal agency or commission to monitor international recruiters and the recruitment of foreign workers. Congress also should require that employers bear all the costs of recruiting and transporting guestworkers to this country, including workers’ passport expenses.


– Congress should require that all employers report to the Department of Labor, at the conclusion of a guestworker’s term of employment and under penalty of perjury, on their compliance with the terms of the law and the guestworker’s contract. There currently is no mechanism that allows the government to ensure that employers comply with guestworker contracts
– Employers using guestworkers should be required to post a bond that is at least sufficient in value to cover the workers’ legal wages. A system should be created to permit workers to make claims against the bond.

3) A call for Congress to provide guestworkers with meaningful access to the courts.


– Congress should make all guestworkers eligible for federally funded legal services. H-2B workers, except those in forestry occupations, are currently not eligible for legal aid services.
– Congress should lift the restriction on federally funded legal services that prohibits class action representation. Class actions are the most effective legal tool to change abusive employment practices. They are particularly important as a tool in guestworker cases, where workers are fearful of retaliation if they assert their legal rights.

For more on the 2012 blockage of new H-2B regulations read our story, “Picking Crabs Over People.” For a glimmer of hope read, “Mexican and Guatemalan Workers Win $11.8 Million Settlement in Georgia H-2B Case.”

Chaz Bolte is a native of Pittsburgh, PA where he attended Slippery Rock University. He currently contributes to WePartyPatriots, Addicting Info, Secret Party Room, and Football Nation. You can follow him on Twitter @ChazBolte.  This post originally appeared on the WePartyPatriots blog and is reposted here with the author's permission.
Posted by Duane Campbell at 9:32 PM

Good read from a good author