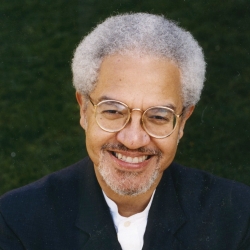 Manning Marable.  Co founder of the Anti Racism Commission and of anti racism work within DSA was awarded the Pulitzer Prize for 2012  for his final book, Malcom X, A Life of Reinvention.
See his obituary here:http://antiracismdsa.blogspot.com/2011/09/manning-marable-1950-2011.html
Manning Marable, a founding Vice-Chair of DSA, passed away Friday, April 1, 2011 from complications of pneumonia. The death of our comrade Manning is a great loss for the broad left in our country. His major biography of Malcolm X, Malcolm X: A Life of Reinvention,  tragically came out just after his death.  He had many other major works, including "How Capitalism Underdeveloped Black America", a biography of W.E.B. DuBois, a total of  11 books and hundreds of articles on the important issues of our days.


Manning played a major role in the merger of our predecessor organizations, NAM and DSOC, into DSA. He was both a Vice Chair and a member of the National Executive Committee (later the NPC) of DSA. For the first years of DSA he brought together a significant group of activists of color around the  publication "Third World Socialist", a publication of the DSA Anti-Racism, African-American, and Latino commissions.
In the 1990,s Manning Marable was one  five leading African-American activist to host a series of national discussions on organizing a movement of the Black Left. Out of the discussions emerged the National Black Radical Congress (BRC), founded on June 19, 1998.  Manning played a critical role in the formation and implementation of the Black Radical Congress (BRC), providing vision and leadership throughout the process.
Manning frequently traveled and  spoke at universities and colleges around the nation. He  used writings and lectures to address racism, sexism and classism in US; and specifically  in the Black community.  Manning’s powerful voice was heard clearly in such noted publications and books as: How Capitalism Underdeveloped Black America (1983), Black Liberation in Conservative America (1997) and The Great Wells of Democracy (2003), and in a political column, "Along the Color Line," which was syndicated in more than 100 newspapers including all the major Black newspapers.
Since the late 90’s, Manning shifted some of his political activism to the Committees of Correspondence for Democracy and Socialism.  He also  remained a warm and good friend of DSA; and an especially strong supporter of the Youth Section (now YDS), speaking often at its youth  conferences.
Manning  Marable  was a prolific scholar.  After receiving his Ph.D, from the University of Maryland, he developed  programs for African American studies at several universities including Colgate, U. of Colorado and the U. of Ohio .  Eventually he was the founding  Director of Columbia University’s Institute for Research in African-American Studies.  Former  students report that in his work Manning created a place where students could stretch their intellect in multidisciplinary  ways.  At the Institute he   served as an advocate and mentor for a generation of new African American  scholars helping them to navigate the difficult paths to publication and achievement in universities around the nation. In doing this work he nourished an entire new generation of scholars and activists.

Posted by Duane Campbell at 9:24 AM