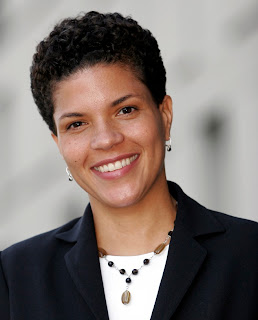 Professor Michelle Alexander and the New Jim Crow American Social Justice Tour Will Stop in Sacramento. Michelle Alexander, noted author and legal scholar is coming to SACRAMENTO Wed., May 25th 2011 from 6:30pm to 8:00pm @ Women’s Civic Improvement Center, 3555 3rd Ave., Sacramento, CA 958817. For more information please contact: All of Us or None 916-226-7623 or Faye @ Sacramento Area Black Caucus at (916) 4845025/fayek@springmail.com.

By Leonard Pitts Jr.
"You have to face the fact that the whole problem is really the blacks. The key is to devise a system that recognizes this all while not appearing to." – Richard Nixon as quoted by H.R. Haldeman, supporting a get-tough-on-drugs strategy
"They give black people time like it's lunch down there. You go down there looking for justice, that's what you find: just us." – Richard Pryor
Michelle Alexander was an ACLU attorney in Oakland, preparing a racial profiling lawsuit against the California Highway Patrol. The ACLU had put out a request for anyone who had been profiled to get in touch. One day, in walked this black man.
He was maybe 19 and toted a thick sheaf of papers, what Alexander calls an "incredibly detailed" accounting of at least a dozen police stops over a nine-month period, with dates, places and officers' names. This was, she thought, a "dream plaintiff."
But it turned out he had a record, a drug felony – and she told him she couldn't use him; the state's attorney would eat him alive. He insisted he was innocent, said police had planted drugs and beaten him. But she was no longer listening. Finally, enraged, he snatched the papers back and started shredding them.
"You're no better than the police," he cried. "You're doing what they did to me!" The conviction meant he couldn't work or go to school, had to live with his grandmother. Did Alexander know how that felt? And she wanted a dream plaintiff? "Just go to my neighborhood," he said. "See if you can find one black man my age they haven't gotten to already."
She saw him again a couple of months later. He gave her a potted plant from his grandmother's porch – he couldn't afford flowers – and apologized. A few months after that, a scandal broke: Oakland police officers accused of planting drugs and beating up innocent victims. One of the officers involved was the one named by that young man.
"It was," says Alexander now, more than 10 years later, "the beginning of me asking some hard questions of myself as a civil rights lawyer. … What is actually going on in his neighborhood? How is it that they've already gotten to all the young African American men in his neighborhood? I began questioning my own assumptions about how the criminal justice system works."
The result is a compelling new book. Others have written of the racial bias of the criminal injustice system. In "The New Jim Crow," Alexander goes a provocative step further. She contends that the mass incarceration of black men for nonviolent drug offenses, combined with sentencing disparities and laws making it legal to discriminate against felons in housing, employment, education and voting, constitute nothing less than a new racial caste system. A new segregation.
She has a point. Yes, the war on drugs is officially race-neutral. So were the grandfather clause and other Jim Crow laws whose intention and effect was nevertheless to restrict black freedom.
The war on drugs is a war on African American people, and we countenance it because we implicitly accept certain assumptions sold to us by news and entertainment media, chief among them that drug use is rampant in the black community. But. The. Assumption. Is. WRONG.
According to federal figures, blacks and whites use drugs at a roughly equal rate in percentage terms. In terms of raw numbers, WHITES are far and away the biggest users – and dealers – of illegal drugs.
So why aren't cops kicking THEIR doors in? Why aren't THEIR sons pulled over a dozen times in nine months? Why are black men 12 times likelier to be jailed for drugs than white ones? Why aren't WHITE communities robbed of their fathers, brothers, sons?
With inexorable logic, "The New Jim Crow" propounds an answer many will resist and most have not even considered. It is a troubling and profoundly NECESSARY book
Posted by Duane Campbell at 3:45 PM