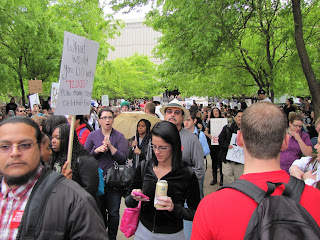 Thousands in Sacramento Rally on April 13
Over 1,500  students walked out of their classes at Sacramento State  University on  April 13,  in protest against the  state budget cuts and the rising tuition in the California State University  System – part of the largest university system in the world.  Student protesters expect that already passed budget cuts will lead to larger classes, fewer classes, eliminated programs,  and an increased time to graduate.  Student fees in the CSU system have increased 224 % since 1998, under both Republican and Democratic Administrations.
History Professor Joe Palermo spoke to the crowd gathered in the Sac State Quad arguing,
“What we've been witnessing in recent years is nothing short of the wholesale auctioning off, often to the lowest bidder of the public commons right under the feet of the majority of California's citizens who never signed on to this long-term project of destruction…
He argued that California's economy has little chance of recovering from the Great Recession if it  remains mired in a politically generated fiscal crisis that prevents us from investing in our future. Unwise public policy today has a tendency to come back and haunt us later. The decision to de-fund higher education amidst prolonged high unemployment and underemployment and record home foreclosures will go down in the state's history as one of the stupidest public policy choices ever taken.”
A series of student organizers from Students for Quality Education spoke of the costs of cuts to their lives.  Amanda Moores described the irresponsibility of the University Administration in producing a 66% increase in Executive Salaries paid for in part by   a 224 % increase in student fees.


After a loud  rally on the Quad, several hundred students marched across campus.  At this hour over 300 students, faculty and staff are occupying the offices of the University President.
There were rallies and marches on at least 10 of the CSU campuses today, ranging from 50 students to several hundred  on some campuses.
Students at Cal State East Bay also occupied a building for a time.  About 30  students at Sacramento State spent the night in the building.
Posted by Duane Campbell at 8:01 PM