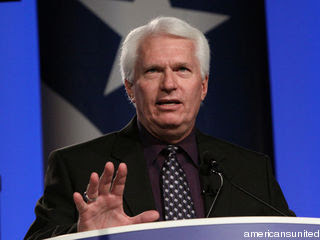 Bryan Fischer, the "Director of Issues Analysis" for the American Family Association, wrote a blog post yesterday that argues that "Germany is giving us a template on how we handle Muslims: just like we handle neo-Nazis," which amounts to German police carrying "out 30 predawn raids against the nation's largest neo-Nazi group two days ago."
Fischer is known for his Islamophobia, previously arguing that the U.S. should have "no more mosques, period," because "every single mosque is a potential terror training center or recruitment center for jihad" and thus "you cannot claim first amendment protections if your religious organization is engaged in subversive activities."
On his Renew America blog, Fischer wrote that "German authorities are determined to 'stamp out' this movement because it is 'potentially violent.'"
Renew America purports to be "a grassroots organization that supports the self-evident truths found in the Declaration of Independence, and their faithful application through upholding the U.S. Constitution, as written."
Fischer, who is scheduled to speak at the conservative Value Voters summit this month alongside Mitt Romney, Michele Bachmann, Mike Huckabee and others, also wrote: "I see no reason why our policies toward Islam in the West in general and America in particular should not be a mirror image of our policies toward the neo-Nazi movement."
Fischer adds that "our aim should be to make it as unthinkable for a resident of America to embrace Islam as we have made it to embrace Aryan Nations ideology. And for the same reasons."
Posted by Duane Campbell at 7:27 PM