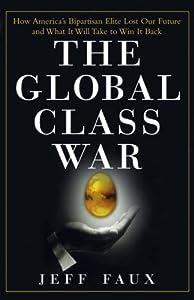 The U.S. and the Mexican economy are closely linked – and this integration has been advanced by the NAFTA/ North American Free Trade Agreement of 1994.   ( See, The Global Class War: How America’s Bipartisan Elite Lost our Future- and What it Will take to Get it Back. 2006.  Jeff Faux.)

The  2008- 2009 banking  crisis in the U.S. has produced a severe  economic crisis in Mexico.  The Mexican economy has contracted by % 6.8  this year,  and unemployment there is not likely to recover soon.

In the midst of this crisis, the government of Mexico has accelerated  the  same  neo liberal economic policies which caused the crisis by attacking a major union and shutting down a public owned electric company in preparation for privatization.

The government fired some 45,000 workers and forced the dissolution of the Mexican Electrical Workers  (SME) union,  one of the leading independent unions in Mexico.

At present there seems little evidence that the government take over will be reversed.

Benedicto Martínez, one of the three co-presidents of the independent Authentic Labor Front (FAT), told Labor Notes that the demonstrations in Mexico City were large and enthusiastic. “I believe that if workers resist and if the movement continues to grow things can change,” he said, adding a call for continued coalition-building and international solidarity, “perhaps in the form of demonstrations at consulates in other countries.” See Labor Notes  by Dan LaBotz below.

Email ThisBlogThis!Share to TwitterShare to FacebookShare to Pinterest
Labels: Electrical workers, Mexcio, North American Free Trade Agreement, The Global Class War: How America's Bipartisan Elite Lost Our Future - and What It Will Take to Win It Back