More than 200,000 people are expected to march in a mass rally tomorrow in San Juan, Puerto Rico, as part of a one-day work stoppage to protest Gov. Luis Fortuño’s plan to trim the budget deficit on the backs of workers.

Using recently passed legislation known as Public Law 7, the governor plans to lay off as many as 30,000 public employees and deny collective bargaining to the remainder of the island’s public employees. The U.S. Commonwealth, where unemployment is already at 15 percent, is set to receive $6 billion in federal economic recovery funds, more than enough to cover a projected $3.2 billion budget deficit. 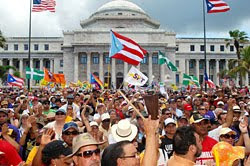 Fortuño, a former Republican delegate to the U.S. Congress, is using the island’s deep budget deficit as a pretext to busting the union and privatizing public services, the Puerto Rican union movement says.

As workers protest in San Juan, workers in New York City, Chicago and other cities will hold solidarity rallies. The rallies are being organized by members of AFSCME, UAW, SEIU and the Labor Council for Latin American Advancement (LCLAA).


will increase the already high unemployment rate on the island as a result of laying off of thousands of public sector workers. It will weaken the role of unions since it suspends collective bargaining for contracts in the public sector and affects labor rights. It worsens the current economic crisis since it reduces the productivity of the public sector in a time when there is an increased need for public services. It pushes for more privatization and deregulation.


Some 8,000 public workers already have been laid off and 17,000 more are scheduled beginning in November. Eventually, 10 percent of the entire public workforce will be eliminated under the plan.

In April 2009, then-AFL-CIO President John Sweeney said Fortuño’s plan would “have devastating consequences throughout the island,”


not only for the 30,000 workers whose jobs will be eliminated, but also for every Puerto Rican who relies on critical services provided by the state government. Rather than solve the current fiscal challenge, the Stabilization Plan may lead to a deeper recession and increased unemployment and thereby create new social and economic problems that will negatively impact the Puerto Rican people—and it must be stopped.


The AFL-CIO and Change to Win strongly oppose privatization of vital public services and call on the Governor to ensure that collective bargaining and other labor rights for workers are protected.


This is the biggest injustice that can be done against working people by a group of people who’ve never experienced poverty.

Posted by Duane Campbell at 4:04 PM