Minute men conspire against each other 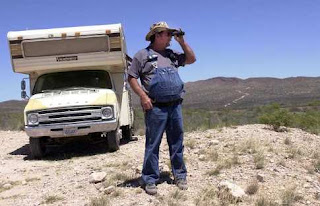 Coup Inside the Minuteman Project
The "citizens patrol" Minuteman Project is eating itself alive. Board member Marvin L. Stewart, described as an "accounts receivable technician" at Veterans Affairs and leader of My Lord's Salvation Ministries Inc., has orchestrated a coup to oust the group's chairman, James Gilchrist, over allegations of "gross mismanagement."

Of course, the dispute is over money. Stewart says the Minuteman Project can't account for $400,000 that a direct-mail company helped raise last year for the organization. Gilchrist (pictured left) is disgusted with his former supporters and says it could destroy the whole organization:

"It certainly could come to that," Gilchrist told The Washington Times. "We have led the fight for stricter immigration enforcement, but I have reluctantly come to the conclusion that the people I am fighting against, including the open-border lobbies, are better than the people I'm fighting for."

Gilchrist firmly rejects the idea that $400,000 is missing, and he has asked a Superior Court judge for a restraining order to halt his firing. A hearing is set for March 21 in Orange County. It's not the first divorce for Gilchrist; he already has split with the Minuteman Project's co-founder, Chris Simcox, who started the Minuteman Civil Defense Corps.
Posted by Duane Campbell at 7:47 PM