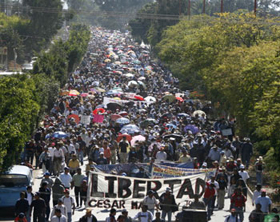 In May 2006, Oaxaca’s state-wide teachers’ union initiated a strike and non-violent occupation of the city center, demanding better pay and work conditions, as well as improvements to the state’s educational infrastructure. At dawn on June 14, state governor Ulises Ruiz Ortiz (popularly referred to as URO) sent in state police to violently break up the ongoing, peaceful teachers’ protest. The brutal police action, which included the firing of tear gas from helicopters onto the crowd below, sparked widespread indignation and outrage in many Oaxacans. The repressive tactics backfired resoundingly, and teachers had retaken the city center by nightfall, pushing back the police—mostly through the forces of their numbers and determination.

More importantly, the violent police action sparked a widespread, broad-based, non-violent popular movement. URO has awakened a sleeping giant—thousands of students, housewives, small business owners, workers, professors, professionals, campesinos, intellectuals and artists have come together to demand the governor’s resignation. And they have formed the People’s Popular Assembly of Oaxaca (APPO), made up of at least 350 different civil organizations working in arenas of indigenous issues, sustainable community development, human rights and social justice. They are working to build a transparent, inclusive, participatory political system—true democracy from the grassroots.

Since the conflict began more than 5 months ago, 17 people have been killed, including U.S. journalist Brad Will, shot in the chest by plain-clothed police while videotaping their attack on a neighborhood barricade defended by people sympathetic to the popular movement. On November 9, leaders of the People’s Popular Assembly of Oaxaca (APPO) publicly asked local leaders of the Catholic Church to provide safe refuge after receiving death threats.

The situation in Oaxaca has become increasingly volatile and violent with hundreds of activists, human rights leaders and community organizers arrested, disappeared and killed. The state sponsored repression as executed by the Federal Police to control a social movement on the rise such as the APPO is a clear example of how the practices taught at the SOA/WHINSEC are put into practice.

We encourage you to take action in your community, find out about local events in solidarity with the people of Oaxaca by checking your local Indymedia, El Enemigo Comun, or the Oaxaca Solidarity Network.

Join the call for solidarity actions on December 22nd, take part in an existing event or organize your community for non-violent protests at your nearest Mexican consulate demanding an end to government sponsored violence and repression in Oaxaca. Published by SOA Watch.
Posted by Duane Campbell at 11:21 AM