Cesar Chavez Taught Us How 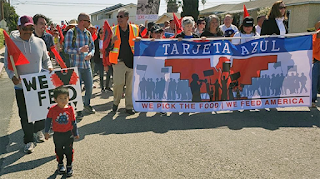 Cesar Chavez, the UFW, and Strategic Racism.
On March 31, 2019,  Eleven states will hold holidays celebrating labor and Latino Leader Cesar Chavez. A new film Cesar Chavez:An American Hero, starring Michael Peña  as Cesar Chavez and Rosario Dawson  as Dolores Huerta opened  in cities across the country on April 4, 2014.
Let us be clear.  Chavez was religious, but he was not a saint. Neither were the growers, their  Teamster collaborators, nor corporate agribusiness saints.  Celebrations should not be about hero worship or uncritical praise, nor  should we ignore the present oppression of farm workers in the U.S.
What they did accomplish along with Philip Vera Cruz , Marshall Ganz, LeRoy Chatfield, Gil Padilla, Eliseo Medina and  hundreds of others was to   organize in California the first successful farm worker union against overwhelming odds.
Each of the prior attempts to organize a  farm worker union  had been destroyed by racism and corporate power.Chavez, Huerta, Philip Vera Cruz, and the  others deliberately created a multiracial union; Mexican, Mexican American, Filipino, African-American, Dominican, Puerto Rican and Arab workers, among others, have been part of the UFW.  This cross racial organizing  was necessary in order to combat the  prior divisions and exploitations of workers based upon race and language. Dividing the workers on racial and  language lines, as well as immigration status  always left the corporations the winners.

The violent  assaults on the farmworkers and UFW from 1960- 1980  along with the current reconquest of power in the fields  by corporate agriculture are examples of strategic racism, that is a system of racial oppression created and enforced because it benefits the over class- in this case corporate agriculture and farm owners.  Strategic racism as described by Ian Haney López  in Dog Whistle Politics: How Coded Racial Appeals Have Reinvented Racism & Wrecked the Middle Class( 2014) is the development and implementation of racial practices because they benefit a group or a class.

Chávez chose to build a union that incorporated the strategies of social movements and community organizing.  They allied the union   with churches, students,  and organized labor.  The successful creation of the UFW changed the nature of labor organizing  in the Southwest  and contributed significantly to the growth of Latino politics in the U.S.

The UFW and Chavez and Huerta have always had severe critics from the Right and  from corporate agriculture. Dolores Huerta  has  been  banned from the history text books in Texas and Arizona as too radical and because she belonged to DSA.  Both also have critics from the left.

Miriam Pawel in The Union of Their Dreams: Power, Hope, and Struggle in Cesar Chavez’s Farm Worker Movement(2009)  uses individualist, personality driven reporting to assert that Chavez himself organized “Witch hunts” to expel union staff who disagreed with his leadership.  See Steve Early’s essay  non Talking Union. http://talkingunion.wordpress.com/2011/05/17/a-union-of-their-dreams-becomes-a-nightmarehas-ufw-history-been-replayed-in-seiu/
What the ultra  left critics allege,
Frank Bardacke’s Trampling Out the Vintage: Cesar Chavez and the Two Souls of the United Farm Workers.(2011), Verso. is the view of a well- informed observer  who worked in the lettuce fields near Salinas as is Lettuce Wars: Ten Years of  Work and Struggle in the Fields of California(2012)by Bruce Neuberger.  These books, along with Pawell’s have been reviewed in prior posts on Talking Union.

Duane Campbellis a professor emeritus of bilingual multicultural education at California State University Sacramento, a union activist, and chair of Sacramento DSA.  He was a volunteer for the UFW from 1972- 1977. He is the Director of the Mexican American Digital History project. www.MexicanAmericanDigitalHistory.org
He currently serves as a Co- Chair of DSA's Immigrants' Rights Working Group.

Posted by Duane Campbell at 5:22 PM