Native Children separated from their families.

The  Trump/U.S. government using separation of families as policy is not new. 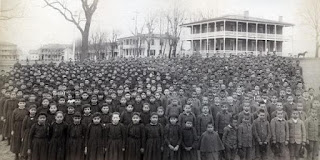 Her grandfather and other elders used to recount their experiences at boarding schools, where the government sent hundreds of thousands of Indigenous children, from nearly every Indigenous nation within U.S. borders, to unlearn their languages and cultures. “A lot of them were physically abused, verbally abused, sexually abused,” she said.
At the center of the stories were the children who never came home from the Carlisle Indian Industrial School, where her grandfather was a student. “My grandpa used to say, ‘Don’t forget these children. Don’t forget my brother — he’s still buried there,’” Soldier Wolf said. She promised that she would remember.
The school, which opened in 1879 in Carlisle, Pennsylvania, and closed its doors 100 years ago this month, was the United States’ most notorious Indian boarding school and the starting point for more than a century of child removal policies that continue to tear apart Indigenous families today. Carlisle, and hundreds of federally funded boarding schools like it, were key to the U.S. government’s project of destroying Indigenous nations and indoctrinating children with military discipline and U.S. patriotism.
It was Soldier Wolf’s closeness to her family and their stories of abuse at the school that inspired her to become the Northern Arapaho tribal historic preservation officer and work on the return of the children lost at Carlisle.

Posted by Duane Campbell at 9:31 AM