New data from the Center for American Progress reveals that the DACA-recipient health care work force includes more than 6,000 diagnosing and treating practitioners, including respiratory therapists, physicians assistants and nurses; some 8,000 health aides, including nursing assistants and orderlies; more than 7,000 other health care support workers; and some 5,500 health technologists and technicians.
The Association of American Medical Colleges told the Supreme Court that nearly 200 physicians, medical students and residents depend on DACA for their ability to practice medicine and serve their communities. Those 200 trainees and physicians alone would care for hundreds of thousands of patients per year in normal times — the association estimates as many as 4,600 patients per year, per person. Under the demands of the Covid-19 pandemic, those numbers will be much higher.
The Center for Migration Studies found that 43,500 DACA recipients work in the health care and social-assistance industries, including more than 10,000 in hospitals.
If the Supreme Court upholds the decision to terminate DACA, nearly 700,000 people — including those health care workers — will lose their ability to work and live in the United States. The administration is preparing to deport DACA recipients and has repeatedly stated that it will do so if the Supreme Court gives it the green light, something that could happen as soon this coming Monday, April 6. There are many reasons for the Supreme Court to hold the administration’s decision invalid, and the pandemic confirms those flaws.
Posted by Duane Campbell at 8:23 AM No comments:

Donate to assist the undocumented

Hope all of you are staying safe and healthy during this pandemic. As you know two of the most impacted groups of this pandemic is our undocumented and asylum seeking families. Many who work in the service and hospitality industry have lost their jobs and do not qualify for unemployment insurance benefits or other government assistance programs. NorCal Resist has been receiving many panic calls from our undocumented and asylum seeking families seeking assistance with paying rent and utilities and groceries. Although we can provide the full rent, we have been helping with a portion of it and a few groceries. We have received over 200 calls from throughout California from Los Angeles, Bay Area, Central Valley, all the way to the Oregon Border.  Although we would like to help everyone, we are an all volunteer organization with a small budget, therefore, limiting assistance to those in the Greater Sacramento Area. In our first week we have assisted over 50 families.We anticipate the need to double in the next two weeks and want to be ready to help as many families as possible.  Here is where you can help us. Please donate to NorCal Resist’s relief fund: https://tinyurl.com/NCRFundAlso, please SHARE it with your networks. All donations are tax deductible. All proceeds raised go towards assisting our most vulnerable families.If you have any questions, please call me 916-949-9506.In Solidarity,Ruth IbarraAutumn Gonzalez
Posted by Duane Campbell at 4:24 PM No comments:

Posted by Duane Campbell at 4:36 PM No comments: 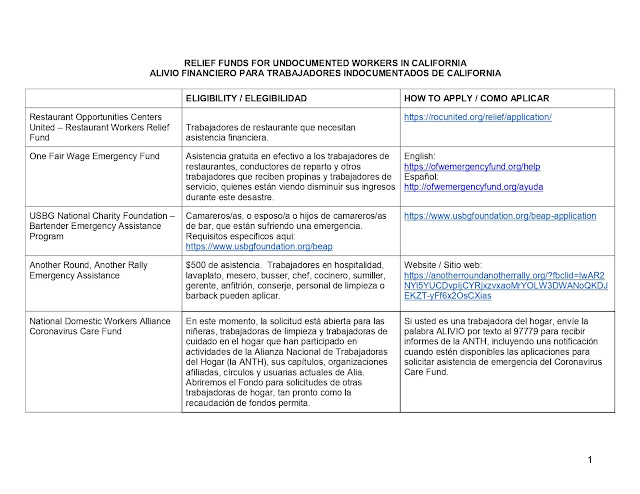 Note: The undocumented were excluded from most of the stimulus.  See the post from LULAC below.
Posted by Duane Campbell at 12:09 PM No comments:

As you may be aware of, a $2 trillion “COVID-19 Relief bill” is making its way through Congress to provide support to working Americans which will include $1,200 checks for every adult, $500 for children, compensation to small business owners and increased unemployment compensation to laid off workers.
Unfortunately, the undocumented immigrant community is not covered in the proposal put forth by the U.S. Senate. We need your help to stand up and defend ALL members of our community now and support the US House bill "Take Responsibility for Workers and Families Act".
Please call/email your member of Congress to make sure that the 11 million undocumented immigrant community is protected during this crisis and ask them to support the U.S. House bill which includes protections for ALL workers. We must demand that all families regardless of status are protected in this legislation. Find your member’s contact information HERE.
Below are some talking points to use when you call today:
Resources:
Together We Rise,
Posted by Duane Campbell at 3:14 PM No comments:

LULAC Statement on the $2 Trillion Bill

Nation’s Oldest & Largest Latino Civil Rights Organization Continues to Push Federal Legislators to Ensure that All Workers are Protected, Including Latinos whose Backbreaking Labor Sustains the US Economy

Washington, DC - Today, the League of United Latin American (LULAC) leadership released the following statements on the legislation being negotiated in the U.S. House of Representatives and Senate:

“Over the last few weeks we’ve seen that during a time of economic crisis, it is Latino, African American, immigrant and low-income workers across the nation who are disproportionately hurt and in most need,” stated LULAC National President Domingo Garcia. “The legislation being negotiated in the Senate is a step in the right direction to alleviate the economic hardships for millions of Americans who are struggling to make ends meet from the COVID-19 pandemic. However, we are concerned about the farmworkers, undocumented workers, and legal residents who need to get help also. All working people in America -- whose backbreaking labor sustains the entire US economy-- need to be included in all of the unemployment and health protections being negotiated.”

“LULAC applauds the House Democrats’ stimulus plan under the leadership of Speaker Nancy Pelosi for directly addressing the needs of Latinos and all working people in this country. This legislation includes larger cash payments of $1,500 per person, expands unemployment insurance and paid sick leave, offers extra aid for small businesses in grants and interest-free loans to small businesses, including $300 billion in forgivable loans to cover short-term payroll costs, boosts funds to food banks by an extra $450 million, and whatever funds ‘necessary’ to account for more people in need of food stamps, and bans utility providers from cutting off service during the crisis. We will fight alongside House Democrats to ensure America’s working people are not forgotten. We demand that Republican Senators swiftly take action and stop playing politics with people’s lives especially as the death toll increases daily across the country due to COVID-19.”

LULAC has also demanded that the COVID-19 rescue bills being negotiated in Congress include the following:

In the last decade, U.S. Latino-owned companies generated $470 billion in revenue and created 3.2 million jobs. Latino businesses are struggling to stay afloat. The American economy will suffer if Latino owned businesses suffer, many of which are small and medium-sized, are left without the same benefits corporations are poised to receive from a stimulus package.

Many low-wage workers in the retail and service industry who earn minimum wage face the difficult decision between risking catching the virus at work with no insurance or staying home without pay. This is not a choice that families should have to make.

Latinos need aid to address keeping education, childcare, and school meal programs afloat. The impact on students who depend on a free or reduced-price school lunch is stark – we know that nearly 2 out 3 Latino children qualify for these programs. Latino families depend on these school meals to feed their families.

ICE recently announced that they will scale back enforcement efforts in the U.S. and will not carry out operations at or near health care facilities. LULAC has agreed that ICE should most certainly suspend raids, family separations, end the deportation of DACA recipients, and halt immigration hearings immediately.

The first detained immigrant tested positive for COVID-19 today. Those in ICE detention face great danger at this time. These detention centers can turn into death camps quickly since the spread of the disease is rampant and can easily get out of control. As such, LULAC has called on the Department of Justice to release non-violent detainees older than 50, those who are pregnant, or have underlying conditions such as a weakened immune system or heart or lung disease, on parole.

LULAC has called on legislators to represent the interests of all working families, including an estimated two to three million farmworkers who are employed across the United States. Farmworkers and ALL workers should be included in the COVID-19 rescue bills coming out of Congress. Farmworkers, who feed the entire country and world, earn poverty-level wages, work under substandard conditions and face a myriad of health and other issues due to their living and employment conditions.
Posted by Duane Campbell at 7:25 PM No comments: