Migrant Caravan Being Used by Trump 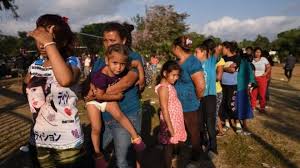 The caravan of migrants from Honduras heading across Mexico for the U.S. border is a very inopportune act. It is dangerous,  It will add votes to the Trump forces in this critical last few weeks of the election. The caravan will consolidate the power of the Trump regime, an enemy of all immigrants.

I have been active in immigrants’ rights for over 20 years and continue today. I understand the motivation of these caravans and empathize with the migrants.
But, at this time, the cost of the caravan is too high.  The caravan will substantially increase the vote for Trump supported candidates in marginal districts and may even leave the House in the hands of the Trump clique.
Trump and his campaign is already using the fear of a migrant Invasion in swing districts – and it will work.
In 2013 the many forces of immigration had reached a compromise in the U.S. Senate.  With a few short days left in the session, the compromise was on its way to a vote. ( Full disclosure: I opposed parts of the compromise).  Just as the vote approached, a migrant caravan came to the border- hysteria was rampant, and several Republicans were challenged from the Right.  Eric Cantor lost his seat in the House and his leadership position.  And, the compromise bill died.  We have suffered a oppressive system since then. This failure contributed to the rise of Donald Trump and the nativist segment of the Republican Party.
It could all happen again.

The intolerant campaign promoted by Donald Trump and supported  by the Republican Party is a call to the “silent white majority” and a demand that 11 million immigrants be deported.  This campaign promotes a dangerous and divisive racial message.  It must be vigorously opposed.

Donald Trump is a serial liar, he  regularly incites political violence and he  is a  rampant xenophobe, racist, and  misogynist.

Trump has an overly cynical and conspiratorial view of immigration: calling for  building walls, breaking up families,  and deporting  people.  This fear mongering political message has found a very receptive base within our society among xenophobic and angry conservative older voters.

This campaign is dangerous.  It mobilizes right-wing anti immigrant forces. Trump’s campaign is not just racism- it is a strategy to magnify racism to win the election – and we must defeat it.  He is promoting an anti Mexican, anti immigrant, anti Muslim agenda. This is more than the ranting of a fringe right. He is mainstreaming racism and the caravan gives him a opening to do it all again.  Unfortunately the migrant caravan contributes to this campaign.

Only the participants in the caravan  can make the important decisions of the caravan, but as a minimum, it should be delayed until after the election.
https://www.cnn.com/2018/10/19/americas/caravan-mexico-border/index.html