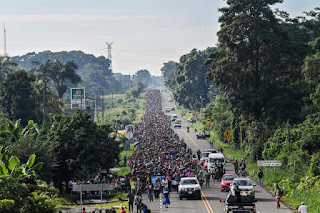 Foul tactics: Fox News  fear creation about the caravan from Honduras.  See  how Trump is using the news cycle to build the Republican campaign

What can we do?
This fear campaign may cost the Democrats several seats in the very close Congressional election on Nov. 6.  What we can do is work twice as hard to defeat the Trump/Republican campaign.


We must Defeat Trump and the  anti immigrant Republican agenda:.

·      We must stop him now before he and his enablers can further consolidate power.
·      The available way to stop him is to Vote to win control of the U.S. Congress in the 2018 election.

Who you vote for depends  upon which Congressional district you are in:

October 22, Last day to register to vote.  After 22, you will need to register for a provisional ballot.