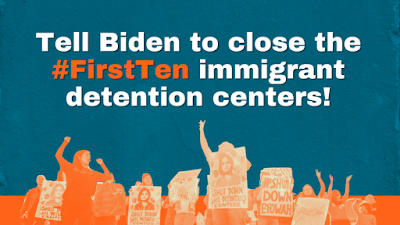 For the last four years, immigrant communities have experienced Trump's never-ending racist and xenophobic attacks, including a massive expansion of the immigration detention system. As President Biden begins to undo these harms, he must prioritize dismantling the cruel immigration detention system that deprives the liberty of thousands of immigrants and people seeking asylum each year.

Join Detention Watch Network, in collaboration with communities across the country, as we demand that the Biden administration fulfill its commitment to restoring humanity to the immigration system by recognizing that detention has no place in a just and humane system. People navigating their immigration cases should be able to do so in community, not behind bars in detention. We call on the Biden administration to take bold action towards ending the use of detention entirely by shutting down and ending contracts for the following ten detention centers that are emblematic of how the immigration detention system as a whole is inherently abusive, unjust, and fatally flawed beyond repair.

The facilities on this list represent every facility across the country where medical neglect is common, physical and sexual abuse are widely reported, basic necessities are lacking, food is rotten, access to counsel and support is restricted, and immigrants needlessly suffer. This list provides a roadmap, a #FirstTen to communities not cages.

Posted by Duane Campbell at 7:46 PM

Email ThisBlogThis!Share to TwitterShare to FacebookShare to Pinterest
Labels: Close the detention centers