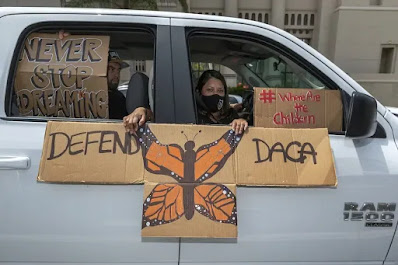 The first two weeks of Joe Biden’s presidency brought relief to millions of people across the country, including those who fight for immigrant justice. So far, we have seen several immigration actions by the Biden administration—including the restoration of Deferred Action for Childhood Arrivals (DACA), the end of the Muslim Ban, the creation of task force to reunite children with their families, the announcement of a moratorium on deportations, and the introduction of legislation to provide a path to citizenship for millions of undocumented people.

In short, President Biden has started the long process of undoing the damage wrought by the Trump administration and is turning federal immigration policies in a new direction.

President Biden deserves credit for honoring key Day One commitments to our communities. But reversing Trumpism can only be the first step. We don’t want to return to “normal.” We need to build toward a more just future.

We need a presidential administration that is prepared to dismantle cruel and inhumane detention and deportation policies and detention centers and reunite families who have been separated.

The Biden administration needs to keep taking action to dismantle the enforcement system, fundamentally reform the government agencies tasked with enforcing immigration to put human rights and needs first, and ensure that Congress adopts a path to citizenship for all of our community members.

Through several hundred executive orders and actions, Trump expedited the building of a racist border wall, tore children from their parents’ arms, banned people based on their religious identity, stripped immigrant youth and Temporary Protected Status (TPS) holders of their protections from deportations, imposed a racist wealth test on our immigration system, and turbo-charged an enforcement apparatus that was already well known for systematically violating people’s rights. The list goes on.

Of course, the Biden administration must make the full reversal of these nativist actions a top priority, and all of these executive actions must be undone. But returning to the 2016 status quo is simply not an acceptable option. It’s worth reiterating what we already know.

First, since 2001, the federal government has poured billions and billions of dollars into an immigration enforcement system that fuels human misery. More money is now spent on immigration enforcement than on all other federal enforcement combined, and the agencies in charge —Immigration and Customs Enforcement and Customs and Border Patrol, both part of the Department of Homeland Security— are notorious for violating detainees’ rights, torture, and even murder. In the last fiscal year, 21 immigrants died in ICE detention. A 2018 analysis found that CBP agents had killed 97 people over the prior 15 years, under both Republican and Democratic administrations.

Second, despite the widespread reporting on rampant abuses, these agencies have proven allergic to accountability. Immediately after Biden’s moratorium announcement, it became clear that ICE officials were refusing to implement the new administration’s policies—unsurprising given what we know about the white supremacist views of many within ICE and CBP.

These are not cases of bad apples who need to be retrained. These are ruthless agencies that must be dismantled.

In addition to fighting to protect the moratorium that has now been attacked by Republican Attorney General Ken Paxton, President Biden and incoming DHS Secretary-Elect Alejandro Mayorkas should establish a goal of ending immigration detention within two years. They can achieve this by immediately reducing detention levels starting by releasing everyone at heightened risk of COVID and simultaneously initiating a file review of every person in ICE custody.

The administration should also end state and local entanglement with federal immigration enforcement that has torn apart families across the country, end the notorious Operation Streamline, and immigration-relation prosecutions.

As it ends these policies, Biden and Mayorkas should adopt new prosecutorial discretion guidelines to significantly reduce the universe of people targeted for deportation with the goals of keeping families together; counteracting racial injustice in the immigration system; declining to pursue charges that are stale via a policy akin to a five-year statute of limitations; allowing people who are eligible for affirmative pathways to legal status a fair chance to comply with the law; and undertaking a complete EOIR docket review consistent with these new guidelines.

This list is not exhaustive, but provides a clear set of policies that would truly move this country away from the racist, abusive enforcement that has characterized the past two decades, and especially the past four years.

Finally, the Day One bill cannot just be a messaging bill. The administration must make it a top priority for passage this year, using every tool at its disposal to ensure legislators pass it on Capitol Hill. With Democrats in control of the White House and both chambers of Congress, there is no reason for delay. President Biden, Speaker Pelosi, and Majority Leader Schumer must work together to deliver the path to citizenship for millions of undocumented immigrants this year.

Posted by Duane Campbell at 8:54 AM