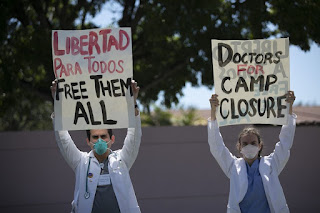 The outcry over ICE and hysterectomies

US Immigration and Customs Enforcement is facing allegations that women detained at one of the agency’s facilities in Ocilla, Georgia, underwent unnecessary gynecological procedures, including hysterectomies.

The allegations began with a nurse, Dawn Wooten, who filed a whistleblower complaint on Monday that cited concerns about a seemingly high number of hysterectomies performed on immigrants detained at the facility.

On Wednesday, Rep. Pramila Jayapal, the vice chair of the House immigration subcommittee, said in a statement that she had been briefed by three attorneys representing detainees at the facility. At minimum, she said, 17 or 18 people held at the Irwin County Detention Center had been subjected to unnecessary gynecological procedures — often “with the clear intention of sterilization” and without obtaining proper consent.

“It has become painfully clear to me that the initial reports ... are likely part of a pattern of conduct,” Jayapal said.

Many of the details of the allegations against the Georgia facility are still emerging, and both ICE and the private operator of the facility have called for skepticism of the complaint, which relies on secondhand accounts of the hysterectomies that were allegedly performed. Attorneys have since come forward with firsthand accounts of such procedures, but it is not clear to what extent ICE and the medical staff involved sought the detainees’ consent to perform those procedures or whether they were medically necessary.

But the accusations, which echo of the ugly history of coercive sterilization in the US, have sparked widespread outrage — including calls for formal investigations. But this is far from the first time that ICE, the federal agency charged with enforcing immigration law in the US, has been accused of neglecting immigrants’ health and safety, especially amid the coronavirus pandemic.

“I don’t think this is necessarily a systemic sterilization by ICE. I think this is the kind of thing that is allowed to flourish in the course of poor oversight and terrible, inhumane conditions of confinement,” said Sarah Owings, an attorney for one of the detainees, told NBC.

The complaint describes one gynecologist as a “uterus collector”

The initial disclosed complaint, filed by a nurse, Dawn Wooten, in cooperation with a coalition of immigrant rights groups led by nonprofit activist group Project South, said female detainees had been subjected to a troublingly high number of hysterectomies while in custody at the Georgia facility.

As first reported by Prism, the procedures were allegedly performed by Mahendra Amin, a gynecologist associated with Coffee Regional Medical Center and Irwin County Hospital in Georgia. In 2015, Amin and several other doctors reached a more than $500,000 civil settlement with Georgia prosecutors to resolve allegations that they submitted fraudulent claims to Medicaid and Medicare.

Wooten is quoted in the complaint about the doctor: “We’ve questioned among ourselves, like, goodness he’s taking everybody’s stuff out. … That’s his specialty, he’s the uterus collector.”

But the detention facility, which is operated by the private prison contractor LaSalle Corrections, continued to send patients to him.

According to Wooten’s complaint, the detainees, many of whom have limited English skills, were allegedly sent to a gynecologist outside the facility who performed the hysterectomies, often without them fully understanding why they were getting the procedure done. One woman was told it was because she had a “thick womb” or “heavy bleeding,” even though she had never experienced heavy bleeding or been told by a doctor previously that she had a thick womb, according to the complaint.

BuzzFeed reported that ICE informed lawmakers Tuesday that the detention center had only “referred” two detainees for hysterectomies to outside health care providers since 2018, and that the procedures had been approved by the facility clinical authority. Still, it’s possible that detainees could have received hysterectomies without being specifically referred for the procedure.

Several attorneys representing detainees who had been treated by Amin came forward with similar allegations on Tuesday. One attorney, Benjamin Osorio, told NBC News that Amin performed hysterectomies on two of his clients that they think may have been medically unnecessary.

Hysterectomies can be commonly used to treat noncancerous growths in the uterus that contribute to heavy periods and painful sex, as well as endometriosis, pelvic support issues, abnormal uterine bleedings, chronic pelvic pain, and gynecologic cancers. But the American College of Obstetricians and Gynecologists advises that, depending on a patient’s condition and comfort level, they may “want to try other options first that do not involve surgery” or see if the condition improves on its own first, waiting to perform the hysterectomy until a woman no longer wants to bear children.

Posted by Duane Campbell at 2:46 PM