It is Not About Open Borders 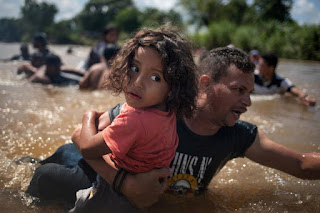 Dan La Botz has written an extensive piece on Open Borders   in the DSA publication  Socialist Forum. I want to critique some parts of his arguments.

His piece is Ten Arguments for Open Borders, the Abolition of ICE, and an Internationalist Labor Movement (Fall 2019) Responses

La Botz  is well informed in this field and  makes the best case for open borders.  However, the conclusions do not necessarily follow from his arguments.  In my view, he is about 80 % correct . At the same time, we should not assume that Open Borders is the only correct plan for the left, nor that it is feasible.  We need clarity on these issues in order to build our movement. And we should be aware that the  Charles C.Koch Foundation,  Milton Friedman, and others  Right  wing economists support Open Borders.

At the same time, most of organized labor, most of the major Civil Rights organizations, and the progressive wing of the Democratic Party- ie. the Sanders campaign, do not support open borders. We should understand why.

La Botz’s descriptions of the economy and the political forces, and his analysis are very well informed.  The conclusions he draws from this work  go beyond the arguments he makes.  I do not have the time to go through each of  the arguments in detail.  His is  a substantive piece.  I can only point out some of the problem areas.

1.     It is true that DSA at the August convention endorsed open borders.  Open borders is the policy of DSA.  Not all of us agree.

In 2018 I  described some of these contradictions in a  piece Toward a Socialist Perspective on Immigration on Democratic Left. I am unable to locate that piece now,  The DL archives have had some disruption.
A  related piece was posted as   Steps Toward a Labor Perspective on Immigration on the North Star blog.
https://www.dsanorthstar.org/blog/steps-toward-a-labor-informed-position-on-immigration

Here is an excerpt.
“It Is Not About Open Borders

In the article, “The Left Case against Open Borders”, writer Angela Nagel  gets some  of the economic conditions correct, but like Trump, she argues without evidence that the problem is that  unions, the Left  and immigrants’ rights activists support  “open borders”.   Her  writing  follows from the position in Melting Pot or Civil War? A Son of Immigrants Makes the Case Against Open Borders – (2018) by Reihan Salam
Developing a policy on migration for labor and  the left  is far more complex than presented by  Naegel and other writers.

First we must  deal with some of  the false accusations about the role of unions  in the immigration policy  debates.

Writer Nagel is wrong  in asserting that the left and labor favor open borders. This is accepting the false narrative of Trump and the anti- immigrant forces. .

There has been a long and well developed movement for immigration reform, along with connected policy proposals – few of which argue for open borders. Progressive policies and practices have emerged from within U.S. communities and the labor movement. “
2.      I agree  with La Botz that ,” We are in a struggle for hearts and minds on the question of immigration, a key issue in U.S. politics today”  He then  locates the problems in the crisis of 9/11  and  austerity policies following the economic crisis of 2008.
While those issues were important, but, anti immigrant hostility was rampant as early as 1994 in the Proposition 187 campaign  in California when a Republican governor Pete Wilson gained re- election during a recession by blaming Mexican  immigrants for the job losses. Some 55 % of California voters cast their ballots for a harshly anti immigrant measure. Republicans have since  been repudiated in California and the state is a Sanctuary State.  However,  the contents of  the California  Prop. 187 Save Our State measure became federal policy as a part of the  Immigration Refo0rm  Act of 1996.

On a national level  Republicans passed and Bill Clinton signed the  Immigration Reform and Immigrant Responsibility Act of 1996,  a repressive bill that  provided for the construction of fencing along the border and criminalized many factors of immigrant life. Over the decades there were numerous appropriation bills to provide increased funding for the Border Patrol, militarization and fencing of the border.  See, Sand and Blood: America’s Deadly Stealth War on the Mexican Border, by John Carlos Frey.

Many of the current repressive actions at the border were made possible by the Trump Administration’s use of this 1996 legislation.

3.    La Botz is accurate in describing many of the political forces since 2001. While I can agree with him  that the anti immigrant campaigns contribute to capitalist exploitation,  I do not  agree that Open Borders campaigns will advance the rights of immigrant workers.  The DSA International Commission has a number of pieces supporting the position of Open Borders as put forward by La Botz  and this position is supported by Alexandria Ocassio-Cortez, among others.

However the U.S. organized labor movement is not there, nor are major political movements such as the Civil Rights organizations and the Sanders campaign.   We should try to understand why these groups, our usual allies, are not arguing for open borders.

La Botz argues that organized labor does not currently support an internationalist position due in some part to the shortcomings of union leadership. That may be part of it.  And, he  has long argued  for the  Rank and File approach to resolve these weaknesses.  The debate over a rank and file approach is significant.  For an introduction see A Strategy to Build Labor Power on Jacobin and here
https://www.dsanorthstar.org/blog/a-strategy-to-buiild-labor-power by Luke Elliot- Negri.

I can't settle the rank and file argument here, but at least recognize that it has not yet worked.  Since it has not yet worked, we should be cautious in incorporating the assumptions of the rank and file campaign approach  as a part of a strategy for responding to migration.   It is only an idea.  There is only scattered evidence to support it.  We need strategies based upon really existing conditions, not wished for new unions.

Instead of open borders, most progressive unions have been arguing for revised immigration and labor policies that protect the rights of migrant workers including their right to form unions.  We should work with labor unions, and with workers centers.  But, we cannot assume that the unions support the rank and file strategy.  Instead, we should seek migration policies that are possible within the present  political reality.
4.    La Botz, in his piece, argues for an internationalist labor position.  That is fine.  I am all for internationalism.  I hope we get there some day.  While supporting internationalism, we do not all support the abolition of nation states.  That is an extreme position. We should note that this argument has been active since at least 1914 and it has not yet made significant progress.   I wish the internationalist well, but I also favor working in the real world- as it is.

When La Botz proposes the abolition of borders, we have to consider what would take their place.
My view of history is that nation states, with all of their problems, have been the only instrument that have  limited the exploitation of the working class. That is why working people’s movement seek to gain control of governments. They hope to use their control of governments to protect their lives, their families.  Since the new deal, national governments have imposed some limits on corporations.
I accept as accurate  La Botz’s  descriptions of the multinational corporations.  The question is, what are we going to do about it.  La Botz is certainly  correct that in this neoliberal era workers  are losing ground.  However, tell me where corporations have been limited by any power other than a nation state.
Without national and state governments, the working people would be even more exposed to abuse by the multinational ruling class- the party of Davos.  For example, it is states and nations that are now suing Facebook and Google.  If we no longer have nations, who will sue them?  And, who will establish the courts in which to sue?

“Immigrants—documented and undocumented—make up today about 45 million people out of a national population of 327 million, or 14 percent of the total U.S. population. Some 35.2 percent are lawful immigrants and 10.5 percent are unauthorized immigrants. But immigrants are more important in the workforce—where there are 29 million—making up 17 percent of the total. Undocumented workers tend to be concentrated in certain industries like agriculture, constriction, leisure and hospitality (i.e. restaurants), where they make up a significant proportion of the workforce. If workers are to raise standards and exercise power in these industries, they will need to defend the rights and interests of undocumented workers.
Workers who have few or no political and civil rights and are forced to take low-paying jobs with poor conditions do, in certain circumstances, create  downward pressure on labor standards. But so too do other groups in our society, including those workers who are not in unions – these represent 89.5 percent of all workers. This massive pool of unorganized workers represents an even greater menace to overall working class well-being. This is, of course, not the fault of unorganized workers themselves, but the employers and politicians who have made it so difficult and costly for workers to form unions in this country. The greatest threat to the native-born U.S. worker is not the immigrant, but the employers who exploit them and the government that fails to enforce or takes away their rights.”
We should be opposing these divisions in the working class.  This includes actions of  solidarity with migrant workers.  These actions  are essential. But, why do you think that organized labor, including that portion of organized labor led by immigrants, is not pursuing open borders?    There are reasons why most of the progressive movement, most of organized labor, do not support open borders.  It is  because open borders is in part a neoliberal capitalist utopian dream or nightmare.
The Trump administration and the Republican Party want the election campaign to be about open borders.  The accusation of open borders mobilizes their nativist, reactionary right wing.
And the nationalist right wing accuse those of us  on the left of being in favor or open borders because that helps them to win the public debate against immigration.  It fosters fear and anxiety. This effort opposes both migration and unionization.   For some insights on how this debate might be won or lost, see
Ian Haney Lopéz,  Merge Left: Fusing Race and Class, Winning Elections, and Saving America.
However, in my experience, for decades, few migrants are advocating open borders. This is not a campaign emerging from immigrant workers.   Rather, migrants  are seeking a way to work and feed their families , and keep their families safe from violence.
Instead of arguments for open borders, I urge  a perspective on organizing that begins the conversation within the experience and common sense of working people. We can win that argument.
Dan La Botz has done a great service by laying out the arguments for Open Borders.  And he is correct in proposing that migration and borders are critical emerging issues facing the environmental justice movements.  We should know and attend to  these arguments.
Duane Campbell ,Sacramento
La Botz also wrote a response to my critique.  You can find it here.
https://socialistforum.dsausa.org/responses/ten-arguments-for-open-borders-the-abolition-of-ice-and-an-internationalist-labor-movement-fall-2019-responses/