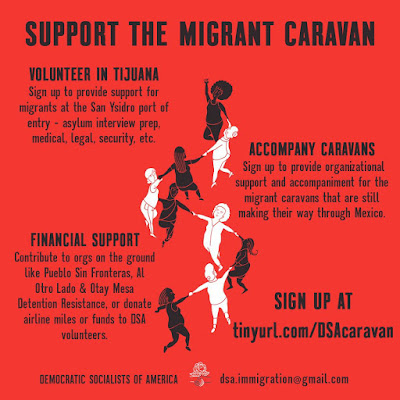 We'd also like to acknowledge and thank our DSA comrades currently in Tijuana providing direct aid support to migrants whose trip has stalled just shy of our border. They've joined up with a coalition of volunteers to provide aid work with some of the migrants. The following is a message from DSA-LA organizer Andrew Hall on why he volunteered:
"On any given day, tens of thousands of immigrants are locked up within our borders. Many have been held against their will for years. Those in for-profit detention centers may labor for as little as $1 per day in order to access hygiene products, clean water, and food. Some haven’t breathed fresh air, or felt the warmth of sunshine on their skin in months. Nearly all are utterly cut off from someone they love.


Then there are those who aren’t let in. Contravening both the U.S. Immigration and Nationality Act and the international Convention Relating to the Status of Refugees, asylum seekers are currently being forced to wait in Mexico while their cases are processed. Thousands are packed into shelters near the border. Last week, two people threw a canister of tear gas into one of them. It detonated in the section for women and children. The next day, two Honduran teenagers on their way to a shelter for unaccompanied minors were murdered. Far more widespread is illness due to crowded, unsanitary conditions.
As far as I’m concerned, in a nation as disproportionately wealthy as ours, anything short of a complete dismantling of our borders is an inadequate response. But until we can all move freely, I hope we can at least agree that it is wrong to deny entry to those seeking asylum from violence at home, it is wrong to respond to those fleeing poverty with separation from family and indefinite detention, and it is wrong to sit back silently while these wrongs are committed in our name.
So because I’m fortunate to have a week of vacation ahead of me, I’m going to the border to do what I can. The point, ultimately, is not to help people endure squalid conditions and forced separation, but rather to organize a movement to bring an end to this treatment altogether. So abolish ICE, by all means. But more to the point, let’s put an end to the imperialism that impoverishes and destabilizes communities around the world, to the capitalist system that pits workers against each other both within our borders and beyond, to an immigration system that not only turns its back on but actively harms so many of the most vulnerable among us, and yes, ultimately, to borders altogether.
And in the mean time, let’s do everything we can to care for those locked up, and those locked out too. Not everyone can render aid directly, but we can all talk to friends and family, colleagues and neighbors, local and national representatives... I’ll likely be back among my loved ones in a week. Let’s build a world where everyone can so confidently predict the same."
DONATE
Help cover lodging and transport costs for other DSA volunteers:
https://cash.me/$DSAImmigration
Posted by Duane Campbell at 10:40 AM