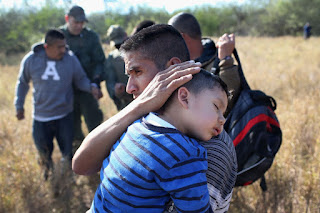 ICE NON-CRIMINAL ARRESTS TRIPLE: "Federal arrests of undocumented immigrants with no criminal record have more than tripled under President Donald Trump and may still be accelerating, according to an NBC News analysis of Immigration and Customs Enforcement data from his first 14 months in office," Ben Leonard reports.
"The surge has been caused by a new ICE tactic of arresting — without warrants — people who are driving or walking down the street and using large-scale 'sweeps' of likely immigrants," NBC News reports, citing a class-action lawsuit filed in June over warrantless arrests in the Chicago area.
ICE spokesman Matthew Burke noted to Morning Shift that nearly 90 percent of the agency's administrative arrests in fiscal year 2017 were of people convicted of a crime or charged with a crime (the tally counts traffic offenses and other low-level crimes). He added that "the agency will no longer exempt classes or categories of removable aliens from potential enforcement." Read more from NBC News here and the complaint here.
Officials set up ‘trap’ to arrest immigrants at legal status interviews. CNN: “A Boston-area US Citizenship and Immigration Services office appears to have been coordinating with local ICE officials to arrest undocumented immigrant spouses married to US citizens when they appeared at government offices to interview for legal status, according to newly released internal emails. The documents, included in a court filing made in an immigration case brought by the ACLU, which is working with the law firm WilmerHale in Massachusetts, show officials from the Boston-area offices of ICE and US Citizenship and Immigration Services, the agency responsible for processing legal immigration requests, discussed scheduling interviews with immigrants at times that were convenient for ICE agents who would be waiting to arrest them — and in some cases initiate the deportation process. The ACLU calls the moves a ‘trap’ in their filing and highlights emails that show ICE officials asking to spread the interviews over time to avoid media scrutiny and for logistical reasons, and, in one case, requesting USCIS delay an immigrant’s meeting by 15 minutes because ICE agents were ‘getting a late start.'”
Posted by Duane Campbell at 10:51 AM