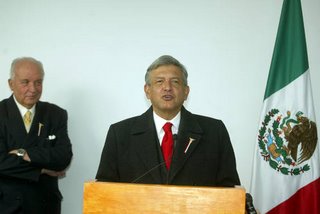 The action comes two days after he declared himself president and it gives some indication of how Lopez Obrador, who lost to conservative Felipe Calderon by a razor-thin margin on July 2, plans to operate his parallel government, which has no legal standing. Calderon will be sworn in Dec. 1.

Under Lopez Obrador's proposal, a commission charged with monitoring prices could order companies to lower the cost of goods and services if they are at least 10 percent more expensive than corresponding items in the United States, Canada and Central America.

Some analysts have suggested that Lopez Obrador, who claims Calderon won by fraud and has refused to accept the results, could be a positive influence if he used his clout to push for changes in Congress, where his coalition has the second-largest bloc of seats.
Posted by Duane Campbell at 8:02 PM