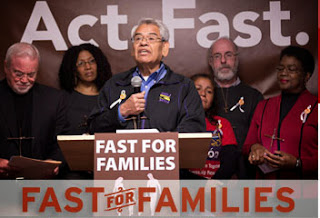 President Obama made the case for immigration reform again on Monday, in a speech in San Francisco that seemed mostly directed to Republicans in Congress, who aren’t listening. (See post below)
Noting the Republican resistance to passing a single comprehensive bill, he struck an oddly lighthearted note. “It’s Thanksgiving,” he said. “We can carve that bird into multiple pieces — a drumstick here, breast meat there.” This drew chuckles. By suggesting that large-scale immigration overhaul can be done incrementally, he was retreating from an argument that has guided reform advocates for a decade: fixing the broken system requires three things at once — tighter enforcement, an improved flow of new immigrants and legalization for the 11 million living here outside the law.


A comprehensive bill passed the Senate with a strong bipartisan majority five months ago and could pass the House in a heartbeat. But, as long as the House speaker, John Boehner, refuses to allow a vote, it is going nowhere.
With legislation thus stalled and the Obama administration continuing deportations at an unmatched pace, immigration advocates have turned up the pressure with a grave urgency that is not shared on Capitol Hill. The tension is unsustainable. So is the suffering.
In a tent on the National Mall, Eliseo Medina, a veteran of the farmworkers’ movement, Cristian Avila and Dae Joong Yoon have been on afast since Nov. 12, and they vow to continue to the point of collapse. They point out that their sacrifice does not match that of those living in shadows and lost from their families. Others across the country are fasting in solidarity. Advocates have prayed at Mr. Boehner’s offices in Washington and Ohio. They have crossed the border and tried to return, offering themselves up to federal agents. They have held vigils at detention centers and tried to block deportation buses.
They have put their lives and futures at risk to push for reforms that a minority is obstructing and to beg Mr. Obama to slow his deportation surge.
One of them, a young man named Ju Hong, interrupted the president on Monday to make his plea. “I’ve not seen my family,” he said. “Our families are separated. I need your help. There are thousands of people. ... ”
Posted by Duane Campbell at 10:53 AM