This immigration reform is not good enough - PICO of California 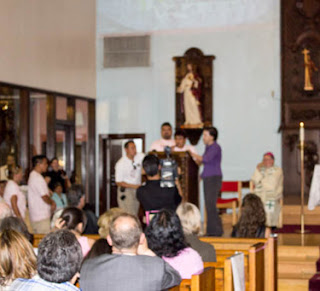 At a mass meeting of over 1,000  and send-off of pilgrims, hosted by Pico of California, with Sacramento Bishop Jaime Soto ,  Pico youth leaders  Cecilia Munoz and Noemi Hernandez declared, “this Immigration reform is not good enough “ at the National Shrine of Our Lady of Guadalupe in Sacramento on Aug.11, 2013.
The meeting in the packed church hall was a send off event for eleven pilgrims to begin a 285 mile walk through California’s Central Valley, the vegetable heart land of U.S. agriculture. – a pilgrimage toward citizenship.  The walk begins on Monday Aug. 11.  Religious and human rights activists are also  preparing to go to Modesto to  join with the pilgrims as they walk neighborhoods to bring pressure on Central Valley Congressmen who have not yet supported comprehensive immigration reform.  The 285 mile walk will conclude in 22 days  at the  Bakersfield office of  Cong. Kevin McCarthy, Republican  Majority Whip in the House.   McCarthy is not usually counted among the Tea Party Congress persons.  His  Bakersfield area district has a 35% Latino population and 22.8 %  of the voters in the 2010 election were Latino.

The Pico youth activists described the past campaign for citizenship, the passage of the Senate bill S.744, and detailed its shortcomings. The current proposal’s barriers to citizenship are too high.  Some 3 million current residents will be excluded .
“We want read comprehensive immigration reform that includes all 11 million undocumented immigrants and that upholds the fundamental American values of family and fairness.”..  this basic message was delivered in both English and Spanish.
“Only a direct, inclusive and affordable path to citizenship for the friends, families, neighbors and members of our faith communities who are undocumented achieves the central goal of immigration reform and Americans of faith will accept nothing less.”
PICO of California is made up of over 400 religious congregations, schools and neighborhood groups and represents some 450,000 families.

Posted by Duane Campbell at 5:10 PM

It's far from being good. 13 years for someone to seek citizenship - absolutely bad. Too punitive. We ought to seek something that makes sense to US bu US- Senate Bill 744 should be send back and start the process all over and soon. And immediately call for moratorium to halt all ICE Raids.